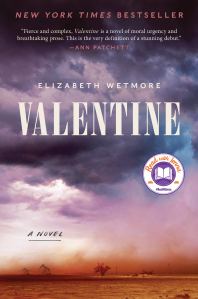 On a February day in West Texas in 1976, 14 year old Gloria Ramirez is brutally raped and left for dead in an oil patch. Dazed and shoeless, she bravely makes her way to the nearest ranch house, where Mary Rose Whitehead and her young daughter Aimee come to Gloria’s aid. When oil rigger Dale Strickland is charged with Gloria’s attack, Mary Rose decides to testify against him, then finds herself up against popular opinion in the boom town of Odessa. This is a place where racism and misogyny abound and no one wants to side with a young Mexican-American like Gloria. Yet Mary Rose finds an unexpected ally in her neighborhood: Corrine, a retired schoolteacher who is reeling from the death of her husband. While Mary Rose is gearing up for the trial, young D.A., a neighborhood girl whose mother left the year before, is struggling to find her way without anyone to look after her. As the stories of these women intertwine, they raise hard questions about prejudice, poverty, justice, and hatred – and what family really means.

Wetmore introduces us to a cast of women, both old and young, struggling with the social norms of their place and time. Oil-rich Odessa is a harsh place, where men risk their lives daily in the oil fields and women are expected to stay at home and mind their children. The women are tough because they have to be, “keeping an eye out for snakes and sandstorms and twisters.” Wetmore’s mature writing evokes the dusty, unforgiving West Texas landscape and its influence on the people who live there. Her characters are damaged, but not broken; they are each, somehow, finding their way toward redemption.

Valentine doesn’t provide us with any easy answers or a pat ending, but it is a lyrical, wrenching tale and a testimony to the strength of women. Its harsh beauty brought to mind some great albums by female country and folk artists. If you’re interested in a soundtrack while you read, you can check out these albums digitally from the library’s Hoopla app:

Quarter Moon in a Ten Cent Town by Emmylou Harris

Car Wheels on a Gravel Road by Lucinda Williams

One thought on “Andrea’s Pick of the Week: VALENTINE by Elizabeth Wetmore”