I enjoy a good historical fiction novel so, as you can imagine, I’ve read more than my fair share of books about war or countries that were occupied by foreign powers during times of conflict. And many of those stories, usually the ones that affected me the most profoundly, were told from the viewpoint of the natives who found their lives upended violently by wartime – whether through privation, discrimination, domination, fear, or loss. But among all of those books, never have I read an account of the war in Vietnam from the Vietnamese perspective written by a Vietnamese author until The Mountains Sing by Nguyễn Phan Quế Mai. 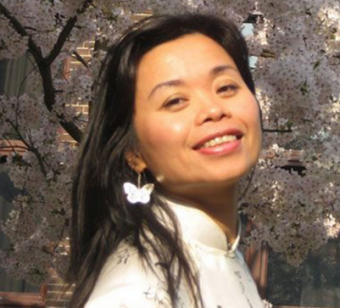 The Mountains Sing is an expansive, multi-generational story told from the alternating viewpoints of Grandma Tran Diệu Lan and her granddaughter Hương. It is 1972 at the start of the story. Hương’s mother, a trained doctor, has volunteered to go south to do her part in the war and to look for her husband who has been fighting in the southern jungles for four years without any word. Hương is being cared for by Grandma, a well-respected and beloved teacher, when they must flee the bombings in Hanoi and journey south to find safety. Along the way, and throughout the war, Grandma tells her granddaughter stories of her childhood in order to keep Hương’s hopes of a reunited family alive. Hương learns that, despite being born into a wealthy family, Grandma experienced countless heartbreaks through many of the dark events in Vietnam’s tragic history –  the French occupation, Japanese invasion, the Great Hunger, Land Reform – yet rose to remake a life for herself and her children. Hương finds strength in these stories as she contends with her own tragedies.

After reading this novel, I was curious to learn more about author Nguyễn Phan Quế Mai. According to her bio, Quế Mai was born in a small village in northern Vietnam and began to learn English in the 8th grade. Today, she is an award-winning poet, advocate for women, refugees and children, and scholar whose PhD thesis focuses on four main areas: “the representation of women and disadvantaged groups in Vietnam War fiction, the manifestation of trauma/PTSD in fiction, the ethics of creative writing, and how to maintain the Vietnameseness of her writing in English.” These ideas are clearly embodied in the careful treatment of her characters, but it is the expressively poetic style of the novel that really stood out to me. Though on the surface the language seems to be simplistic, I found a unique cadence to the words that give the prose beauty and provide a sharp contrast to the suffering and tragedy that go hand-in-hand with war.

The Mountains Sing is clearly meant to engender sympathy and humanize a previously nameless and faceless enemy. The takeaway is that there are no winners in war. The pain, loss, and suffering, as well as the hope and dreams, are the same on both sides. I think this is an important book for Americans to read as it shows a seldom-seen perspective of the Vietnam War and its effects from another viewpoint. Vietnam is a country that has suffered decades of conflict and oppression. And yet, author Nguyễn Phan Quế Mai successfully captures the beauty, courage, generosity of spirit and resiliency of the Vietnamese people, even when surrounded by ugliness and violence. I consider this a book of hope. Despite unimaginable adversity and misfortune, Grandma and Hương never relinquish their humanity. With everything that is going on in the world, this is a message that is particularly resonant today.