Previously we profiled World War I veterans and brothers Harold, Wendell, Clarence, and Kenneth Lovell. There were several other Libertyville families with more than one son in service during the Great War. One such family was that of Cherubino and Frances Gotti, Italian immigrants and the proprietors of a Milwaukee Avenue fruit stand, confectionery, and ice cream parlor.

Cherubino Gotti and Franzika (Frances) Gotti emmigrated independently from Italy sometime between 1885 and 1890. They ended up in Chicago and were married in 1892. They moved to Libertyville in 1904 where they established a fruit stand and ice cream parlor on the west side of Milwaukee Avenue about where the Libertyville Bank & Trust is today (2019). 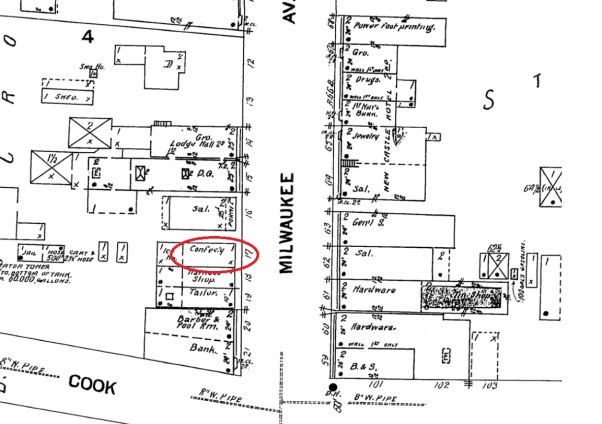 By the summer of 1909, business had grown to the point that C. Gotti & Co. was in need of a larger space. A short hop across the street to a corner store in the Proctor Building (most recently home to Eclectic Design and soon to be Sweet Home Gelato – 2019) would make the firm the “largest and most commodious ice cream parlor in the village.”43  The storefront vacated by C. Gotti & Co. was leased to J.T. Robertson who opened the Lyric Theater, Libertyville’s first dedicated “moving picture” house.

C. Gotti & Co. in the corner store of the Proctor Building, circa 1913. Courtesy of the Libertyville-Mundelein Historical Society.

Brothers Harry and Hugo Gotti were born in Chicago in 1893 and 1897, respectively. When Cherubino and Frances moved the family (which also included younger sisters Ida and Quinta) to Libertyville, the boys were about 11 and 7 years old. They attended the local grammar and high school, then held in the original Central School building. Both boys played basketball for the school. Hugo scored the winning basket with less than a minute to go in an exciting 1915 game versus a Lake Bluff team. The brothers were also musical. They played piano at community events.

Harry may not have finished high school in Libertyville. In February 1913, the local paper reported that “Harry Gotti visited the high school Monday afternoon. Gotti was formerly a member of the class of 13. He is now attending Bryant business in Chicago.”47 After that business course, he completed several terms at Northwestern Academy in Evanston. (This may have been what was known as Evanston Academy, a preparatory school, as opposed to Northwestern University.) He started the 1915-1916 school year at the University of Wisconsin to study commerce, but later transferred to the University of Illinois in Urbana.

When the U.S. joined World War I, men above the age of 21 were required to register for the draft June 5, 1917. Twenty-four year old Harry Dominic Gotti complied. His number was called in early August and he was assigned to Company D, 342nd Infantry at Camp Grant near Rockford, Illinois. By the time Harry made a visit home to Libertyville in November, he had been promoted to the rank of corporal.

Now part of Company I, 130th Infantry, Harry shipped out to France from Hoboken, NJ on the ship Agamemnon on May 16, 1918. While Harry’s specific service is not known, the 130th Infantry participated in battles in Somme, Meuse-Argonne, Lorraine and Picardy, France during the late summer and fall of 1918. Sergeant Gotti headed for home on the H.S.S. Siboney departing from Brest, France on May 11, 1919. He was discharged shortly after and returned to Libertyville.

Younger Brother Hugo Gotti graduated from high school as part of the six member class of 1916. He chose to join his brother at the University of Illinois that September. Hugo was too young to register when the draft was first called. In June 1918, he was one of 195 young men who had turned 21 since the last draft registration in the Libertyville draft district. He completed his draft registration card and was called up in early July 1918. Hugo reported to Fort Sheridan for training on July 17. In September, Hugo, now a lieutenant, was assigned to Camp Grant. It is not known if Hugo served any time overseas before the end of the war in November 1918.

Both brothers returned to the University of Illinois for the 1919-1920 school year to complete their studies. While at the University of Illinois, Harry met fellow Illini Mary Kurt. They were married in late April 1921 in Champaign. Harry Junior was born March 28, 1922 in Champaign, but the family relocated to Libertyville by 1923. Daughter Mary joined the family around 1927. Daughter Lolly rounded out the group about 1929.

In the late 1920s, the young couple lived and ran a business, The Soda Shop, on the west side of Milwaukee Avenue. The business ceased operations by the summer of 1931, when the building it occupied was torn down to make way for a new building being constructed for the Consumer’s Sanitary and Coffee Store company. Firkin now occupies that structure. Sometime around 1932, the family moved to Clinton, Illinois, where Harry took a job as an auditor in the Department of Finance for the State of Illinois.

Both Harry Jr. and his sister Mary attended the University of Illinois following in their parents’ footsteps. Harry Jr. joined the army during World War II. He was wounded in Japan and received the Purple Heart. Harry Sr. and wife Mary moved to Oceanside, California in 1952. Harry passed away in November 7, 1971.

It is not known what Hugo did immediately after graduation, but by 1925 he had partnered with friend Otto Boehm in an insurance business in Libertyville. He continued to live at his parents’ home at 152 E. Cook Avenue for the next several years. At the time of his marriage in 1932 to Miss Mary Kennedy, daughter of Mr. E.J. Kennedy and the late Mrs. Kennedy of Libertyville, he was associated with the Aetna Insurance Company in Peoria, but was still living in Libertyville. In the 1940 census, Hugo and Mary are living with Mary’s father and brother at 235 McKinley Avenue. The couple is still at the residence in February 1942 when Hugo registered for the World War II draft at the age of 44. Later that year, he transferred to the Aetna office in Detroit. Hugo Gotti passed away December 7, 1971 in Huntington Woods, Michigan, just a few weeks after the death of his older brother.

One thought on “Libertyville’s World War I Veterans: Harry and Hugo Gotti”