Ann Patchett’s compelling new family saga, The Dutch House, is one of my favorite books of the year.

Danny Conroy narrates this contemporary fairytale, set over five decades. He tells his beloved older sister Maeve’s story, with the requisite absent mother, the clueless father, and a wicked stepmother. Strong-willed Maeve is the heart and soul of the book and her childhood portrait graces the beautiful book cover. 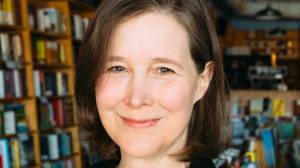 The family’s tale begins before Danny is born, when Cyril Conroy surprises his wife Elna with a mansion in Pennsylvania known as the Dutch House. Cyril, who becomes a real estate magnate, falls in love with the three-story house built by a Dutch couple on their cigarette company’s fortunes. Elna Conroy, who at one time wanted to be a nun, is uneasy in the house and being waited on by servants. When Danny is 3 and Maeve 10, Elna vanishes, leaving the children to be raised largely by the doting servants. Maeve also takes on the role of mothering and guiding her little brother, a bond that will take precedent for the rest of their lives.

A few years later Cyril Conroy marries the much younger Andrea, who is obsessed with the house and hates his children. She brings along two young daughters, and gives the older one Maeve’s bedroom, considered the best in the house. The marriage, like a good fairytale, doesn’t bode well for Danny and Maeve when their father dies a few years later. The house itself is its own character, luring the siblings back to it years after they no longer live there.

I read this engaging story in two days, drawn in by Danny and Maeve dealing with betrayal, abandonment and revenge, as well as love, acceptance and forgiveness. This is a must-read for fans of sweeping family sagas. Highly recommended.

One thought on “Jo’s Pick of the Week: The Dutch House by Ann Patchett”