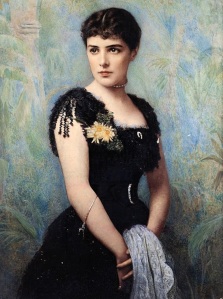 American heiress Jennie Jerome, known for her beauty, was the mother of Winston Churchill.

Three American heiresses from the Gilded Age have inspired their own biographical novels that validate the old Beatles tune, “money can’t buy me love’’.

Stephanie Barron, who writes the popular Jane Austen mystery series, has captured the life of Jennie Jerome in her entertaining novel, That Churchill Woman. Jennie, a beautiful, strong-willed American determined to live life on her terms, became the mother of the future prime minister, Winston Churchill. When she met Lord Randolph Churchill at a party in England, she enjoyed how he appreciated her fine intellect and interest in politics. He proposed marriage just three days after meeting her. His parents relished her family’s vast wealth, which Jennie’s father accumulated from New York’s financial markets.

Winston Churchill (right) with his mother, Jennie, and his younger brother.

After negotiations, Jennie became Lady Randolph Churchill, and her father’s money helped shore up the crumbling Churchill estate, Blenheim Palace, the only palace in England not owned by royalty. Soon Jennie was hobnobbing with British high society and royalty, including Bertie, the Prince of Wales, who eventually became king when his mother, Victoria died. Lord Churchill used Jennie’s shrewd political acumen and writing skills in his rise in Parliament. Alas, she soon learned that “Lord Randy’’ wasn’t keen on her physically. She developed a reputation for her many affairs, which kept tongues wagging among British circles and earned her the nickname “Lady Randy’’. Barron’s meticulously researched prose paints opulent scenes from the late 1800s estates in the United States and England.

Another American heiress, Alva Smith Vanderbilt, got her own story last year thanks to Therese Anne Fowler’s fascinating, meticulously researched novel, A Well-Behaved Woman. Fowler is known for her well-done biographical novel from a few years ago, Z: A Novel of Zelda Fitzgerald. Alva Smith was forced to marry William Vanderbilt when her old-money family lost their wealth and faced the poor house. The Vanderbilts were considered gauche by New York high society because they were nouveau riche from their railroad and shipping empires. With the marriage, Alva saved her family from starvation and helped the Vanderbilts tackle old-money high society. Like Jennie Churchill, Alva also found herself in a loveless marriage. She used her time and her husband’s money to build grand mansions and throwing lavish parties. She also helped found the Metropolitan Opera House because the Vanderbilts weren’t allowed to become members. Alva eventually became a leader in the women’s suffrage movement.

Jennie Churchill and Alva Vanderbilt were not the best of mothers. In That Churchill Woman, Jennie spent little time with her two sons, which was common during this time among British elite. Winston went to boarding school at age 7 and Jennie seldom wrote or visited, despite his pleas. While he almost died from pneumonia, his mom stayed away and continued with a lavish party she threw for the Prince of Wales. She later used her political acumen to help her son Winston in his growing political career.

While Jennie Churchill was largely aloof with her sons, Alva Vanderbilt was an early example of a helicopter parent, based on Fowler’s book. She micromanaged the life of her beautiful daughter, Consuelo, and made her wear a steel rod as a girl to keep her posture erect. She also made Consuelo marry the ninth Duke of Marlborough even though she loved another man. Once again an American heiress helped shore up the Churchill estate, Blenheim Palace, earning her the mean nickname “Dollar Duchess’’.

Consuelo Vanderbilt at age 25, as the Duchess of Marlborough attending the coronation of King Edward VII.

Not to be outdone, Consuelo just got her own biographical novel called American Duchess by Karen Harper. Mother Alva was portrayed in a much harsher light in this book, including a scene where she locked Consuelo in her bedroom the day of her wedding so she wouldn’t run away. In later years the mother and daughter were on better terms, and both found love in their second marriages. Consuelo became close friends to her first husband’s cousin, Winston. She eventually found her desire to help the less fortunate and became known for her charitable work. The weakest of the three books (I really did not care for the first-person narrative), American Duchess still provided a fascinating story.

Jennie Jerome, Alva Smith and Consuelo Vanderbilt were flawed but intelligent women who were more complex than simple society climbers. If you are a fan of Downton Abbey and historical novels with strong female protagonists, That Churchill Woman, A Well-Behaved Woman and An American Duchess offer entertaining looks at the rich and famous. Check them out, after you make yourself a pot of tea and set out a plate of biscuits.

One thought on “Jo’s Pick of the Week: Three novels about American heiresses”