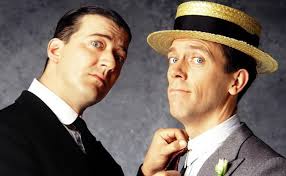 It’s no secret that I’m a fan of literary retellings – classic stories reimagined. Sherlock Holmes is a particular favorite, though I won’t turn my nose up at Shakespeare or Jane Austen, either. That being said, the one genre I’m loath to explore is literary continuations.  You know the kind: a (usually bestselling) author is hired by the estate of a now-deceased (beloved, classic, still-bestselling) author to write more books featuring their most popular characters. Think Ace Atkins, writing Robert B. Parker’s Spenser mysteries, or Sophie Hannah, writing Agatha Christie’s Poirot.

The idea isn’t terrible, I suppose – who among us hasn’t been devastated when a favorite author passes away? And I suspect the execution isn’t awful – many of these continuations receive strong reviews, as their new authors are bestsellers for a reason.

I can’t do it. I just can’t. I am certain that I will be so disappointed in the new version that the old ones will be tainted by association. This line of thinking is perhaps a little overwrought, but I don’t care. The heart wants what it wants, and what MY heart wants is the assurance that Miss Marple will only ever solve the cases Dame Agatha meant for her to solve, no matter how bittersweet that knowledge is.

In a moment of weakness this winter, I succumbed to a glowing review of Ben Schott’s Jeeves and The King of Clubs: An Homage to PG Wodehouse. (Then I left it on my nightstand for a week while I worked up the courage to read it.) 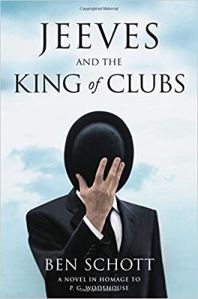 PG Wodehouse is one of the greatest comic writers ever and a perpetual favorite of mine. Ben Schott is a writer best known for Schott’s Miscellaney, a series of books stuffed with trivia ranging from the rules of elephant polo to an explanation of laundry care symbols. As far as I can tell, while he has written for a number of newspapers and magazines, The New York Times among them, he has never before written a novel. Which makes it all the more unusual that the Wodehouse estate would bring him on to continue the adventures of Bertram Wooster and his Gentleman’s Personal Gentleman, Jeeves.

It’s a high bar for any author – Wodehouse novels feel effortless and frothy, but they’re meticulously constructed, weaving together seemingly unrelated subplots in a way that feels both clever and inevitable, with sly wordplay and banter that rewards anyone with a background in the classics. It’s why they stand up to rereading so well – there’s always a new joke to discover, even in the most well-loved passage. So what possessed the descendants of PG Wodehouse to entrust his legacy to a guy who, while handy with a list, has seemingly never written a novel in his life?

I have no idea, but I’m awfully glad they did.

Schott nails the loopy-yet-erudite tone of the original novels. Bertie is as dim but goodhearted as ever; Jeeves is still wise and discreetly managing. The supporting characters, like Aunt Dahlia and Roderick Spode, are their usual bonkers selves. This time, though, there’s an element of espionage among the antics and – GASP – the barest hint of a genuine love interest for Bertie. Just like in the original stories, witticisms, allusions, and ludicrous schemes abound.

The book is very, very good – effervescent and funny and sharp – but I never quite forgot that it wasn’t Wodehouse. But that’s okay, because the book is an homage, not a continuation. Ben Schott gives us a fresh adventure with old friends, and makes me want to revisit the originals all over again.

If you’re a fan of Wodehouse, even if it’s been years since you last read him, give Jeeves and the King of Clubs a try –  it’s a light, nimble, funny read, and a great antidote for a bleak midwinter afternoon.