Jo with one of her favorite authors, Reed Farrel Coleman.

I was fortunate to attend my fourth Bouchercon mystery convention this month in St. Petersburg, Fla., where hundreds of authors talked about their craft with more than a thousand readers. I enjoyed three days of panels and interviews with legendary and debut crime novelists, learning about what makes their characters tick. Ultimately, I was on the lookout for great books I could recommend to our library patrons.

I always come away from this convention a bit awed and overwhelmed. I do read a lot of crime fiction, but I’m not even scratching the surface of what’s out there. I learned about a lot of new authors as well as seasoned writers whose books I can’t wait to crack open. I also got to talk to some of my favorite authors, including Catriona McPherson and Reed Farrel Coleman.

The highlights of the convention were the interviews with the guests of honor. It was a thrill to hear Ian Rankin, creator of the legendary John Rebus police detective series, interviewed by another legend, Lawrence Block. Rankin, whose books are set in his home of Edinburgh, Scotland, received the Lifetime Achievement Award. He still is writing Rebus novels, and said he wished he hadn’t aged his character in real time. Rebus now is facing retirement age and ailments that afflict people in their 60s. The next Rebus book, In a House of Lies, comes out in December.

International Guest of Honor Mark Billingham, who lives in London, gave a hilarious interview with Michael Connolly about how he went from standup comedian to bestselling crime 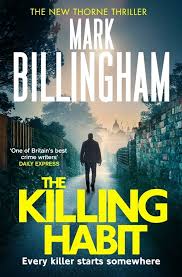 author. His newest book, The Killing Habit, with detective Tom Thorne, was inspired from a small newspaper article about cats being mysteriously killed in the London area. It’s generally a no-no among authors to kill animals in their books – readers don’t mind authors killing humans, but a dog or cat is off limits for some reason. Billingham assured the audience that the cat killings in his book happen off scene.

The new book by the other International Guest of Honor, Denmark’s Sara Blaedel, intrigues me. She sets The Undertaker’s Daughter in Racine, Wis., a city known for its large Danish ancestry. Sara said during her interview that she spent a great deal of time in Racine to get the setting right. I asked her if she had some legendary Racine Danish kringle, which she had. My parents met in Racine during World War II and I still have family there, so I will have to check out Blaedel’s new thriller.

The author who consistently makes audiences laugh is Karin Slaughter, who was a Guest of Honor interviewed by Alafair Burke, daughter of James Lee Burke. Slaughter came to Cook Memorial Public Library a few years ago and gave one of our best author talks ever. At Bouchercon, she regaled the audience about how she sought revenge on her mean, older sisters. Her new book is Pieces of Her. Slaughter’s name is perfect for a crime novelist, and it really is her name.

Bouchercon gave out the prestigious Anthony Awards, which always provides great reading ideas. The Best Novel award went to Attica Locke for Bluebird, Bluebird, a thriller set in East Texas that is available as a book club book at the library. (Read Andrea’s review of this novel on our library blog, Shelf Life.) 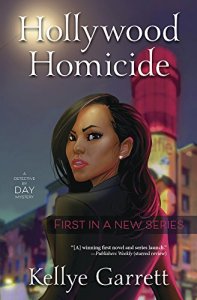 The Best First Novel went to Kellye Garrett’s Hollywood Homicide. It beat out one of my favorites, The Dry by Jane Harper. Another finalist I want to check out is She Rides Shotgun by Jordan Harper.

Lori Rader-Day won the Best Paperback Original award for her excellent The Day I Died. Her new book is Under a Dark Sky. We have been fortunate to have Lori come to Cook Library twice to talk about her books.

The Bill Crider Award for Best Novel in a Series, a new category, went posthumously to Sue Grafton for Y Is for Yesterday, the last in her legendary Alphabet series. She died in 2017 and ended the series with Y. 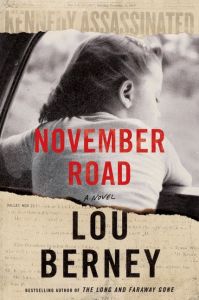 One of the fun parts of Bouchercon is receiving free books. Among my stack, I can’t wait to read Lou Berney’s upcoming November Road, which has received starred reviews from Publishers Weekly, Kirkus, Library Journal and Booklist. Two years ago his excellent novel, The Long and Faraway Gone, won the Macavity Award for best Mystery as well as the Anthony Award, the Barry Award and the Edgar Award for Best Paperback Original. Other authors on my radar are Abir Mukherjee, who has a successful new series set in India, and Amy Stewart, who writes the Miss Kopp series.