When PBS introduced the Great American Read during a kickoff in May, its list of America’s 100 best-loved novels stirred some debate among us readers. Why did some titles make the cut while others were omitted?

PBS explained on its website that it used a public opinion polling company, YouGov, to survey Americans to name their most-beloved novel. An estimated 7,200 people participated. A panel of 13 “literary industry professionals’’ then tweaked the list. Readers can now vote for their favorite books on the PBS website. A series of weekly episodes will air in the fall, starting on Sept. 11. If you missed the kickoff program, you can watch it on the PBS website. The top vote getter will be announced during the grand finale on Oct. 23. You can vote early and often for your favorites. We have the books in our stacks as well as in ebook and eaudiobook format.

Our library shared the Great American Read list with patrons and compiled a display of books that were included and made sure we had ebook copies in Overdrive. Staffers and patrons cheered when their favorites made the cut, while questioning how some other titles were included. I reminded myself that the list includes best-loved novels, not the greatest novels. For example, my absolute childhood favorite, Anne of Green Gables by L.M. Montgomery, was included. Is it one of the greatest novels of all time? No, but it is beloved many readers who enjoyed Anne Shirley’s adventures after she is adopted by an elderly sister and brother on Prince Edward Island. 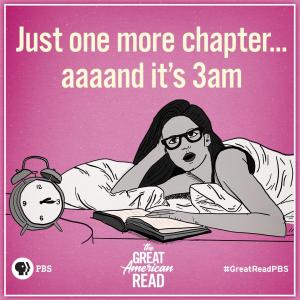 Our library genre study group decided to take a month to read a book from the Great American Reads and discuss it at our next meeting. We each picked something we had not read before. If you are looking for some ideas from the list, this is what we chose:

Jo: A Prayer for Owen Meany by John Irving, one of colleague Ellen’s all-time favorites. I have read a lot of Irving but somehow had not read this amazing, quirky book, which has one of the best openings I have ever read. There were so many passages I wanted to highlight.

Ellen: Lonesome Dove by Larry McMurtry, one of my all-time favorites and winner of the 1986 Pulitzer Prize for Fiction. This epic road trip by two retired Texas rangers shows the American West right on the cusp of change. Ellen also read Their Eyes Were Watching God by Zora Neale Hurston for her classics book club, and said the audiobook read by actor Ruby Dee was amazing.

Andrea: Things Fall Apart by Chinua Achibe, which her daughter read as part of her high school reading list. Achibe looks at what happens to an African village after white missionaries arrive. Andrea thinks Things Fall Apart is a book everyone should read.

Lindsay: The Intuitionist by Colson Whitehead, his first book that tackles the issue of race in an unnamed high-rise city. He most recently won the 2017 Pulitzer Prize for fiction for The Underground Railroad.

Becky: The Curious Incident of the Dog in the Night Time by Mark Haddon, which intrigued Becky because it now is a Tony-winning play. This novel tells the story of an autistic boy who tries to figure out who killed his neighbor’s dog. The book has been praised for being one of the first novels to have a main character with autism, while also criticized in some circles as not being a good representation of the disorder.

Erica: 1984 by George Orwell, a classic written in 1949 that introduced us to a totalitarian world run by Big Brother that still rings true today. It has been popular with our book clubs.

We had a great discussion about these books and the list. Like other readers, we wondered why certain authors, such as Barbara Kingsolver, were not represented. We also talked about how Fifty Shades of Grey by E.L. James made the cut, and acknowledged that while this series is not something we would have chosen, it got hundreds of thousands of people reading and talking about books, which is always a good thing.

Are you going to pick a book from the Great American Read? Let us know what you chose!

2 thoughts on “The PBS Great American Read: Did your favorite books make the list?”