I always am on the hunt to discover lesser known mystery authors who are not New York Times bestsellers. This year I found two series that could not be more different but are highly enjoyable.

Ausma Zehanat Khan’s thoughtful books feature detective Esa Khattak (pronounced Hot-tock) and his partner, Rachel Getty. Set in Canada, the partners work in a division that focuses on minority-sensitive cases. Esa is a quiet, kind man and a devout Muslim. Rachel is brusque, hockey-playing young woman trying to prove herself. Together they make a great detective team. In the first book, The Unquiet Dead, they explore the circumstances of a prominent citizen who fell to his death. Their investigation takes them to the world of the Srebrenica massacre of 1995 in Bosnia. Khan’s books always tackle heavy issues, from Muslim terrorism to the Syrian refugee crisis. 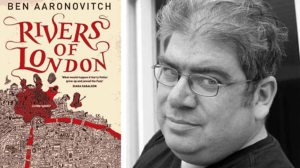 The second series I am enjoying is by British author Ben Aaronovitch, who has written for the Doctor Who television show. His Rivers of London mysteries take readers on supernatural journeys with Probationary Constable Peter Grant. When the rookie cop sees a ghost who is a witness to a murder, he is recruited to work for The Folly, which investigates paranormal crimes. His boss, an eccentric wizard known as The Nightingale, decides to take on Peter as an apprentice. Peter moves into the old house that serves as the Folly headquarters, which is staffed by a housekeeper named Molly, who happens to be a ghost. Peter’s adventures with the supernatural take him all over London and the countryside. Filled with British humor, they are a lot of fun. Start with Midnight Riot, where Peter investigates a series of bizarre murders. The books are classified as science fiction, but they really are a blend of paranormal and mystery.

I have listened to the audiobook versions of both series, and the readers are excellent. Both series are not too long yet so it will not be hard to read all the books. Ausma Zehanat Khan’s series has four books. The newest one, A Dangerous Crossing, came out this spring and is a gripping story about the refugee crisis in Greece. Ben Aaronovitch’s series has six books, and the seventh, Lies Sleeping, will be published in November. Check them out!