I am a Broadway musical nut, and the annual Tony Awards telecast is must-see TV at my house.  Sunday night’s telecast was no exception.  What’s not to like about amiable hosts Sara Bareilles and Josh Groban serving up highlights from the hottest new shows on Broadway?  The Tony Awards now rival the Grammy Awards in the number of outstanding performances they manage to pack into a three-hour program.  This year there was something for everyone, including a surprise performance from Bruce Springsteen, the recipient of a special Tony Award for his one-man show Springsteen on Broadway.

You can find performance highlights from the Tony telecast from each of the Tony-nominated musicals on Youtube, including this number from the night’s big winner, The Band’s Visit, starring Tony winners Katrina Lenk and Tony Shaloub.  In this scene, Israeli cafe owner Dina describes her youthful fascination with famous Egyptian actor Omar Sharif and songstress Oum Kalthoum to Egyptian band conductor Tewfiq.

Given Chicago’s great theater tradition, the windy city is usually one of the first stops for nominated musicals when they begin to tour.  With luck, we should see most of these shows come through town within the next year or two.  In the meantime, the library can help satisfy your curiosity about the most buzzed-about shows.  Be sure to check out the musical scores and original cast recordings already on library shelves and/or Hoopla.  In addition, we have the various movies and books that provided inspiration for the shows that are currently the hottest tickets on Broadway.  Use the links below to check availability in our catalog.

The Band’s Visit:   Winner of 10 Tony Awards, including the coveted Best New Musical trophy, The Band’s Visit may be intimate in scale, but it is huge in heart.  Based on an award-winning 2007 foreign film by the same name, it spins the tale of a small Egyptian band that finds itself stranded overnight in an isolated Israeli town.  Feelings of hope, longing and human connections spark as band members and locals get to know each other.  I had the good fortune to see this charming show in New York last month, and it is a true gem.  Barrington High School and Northwestern University alum Katrina Lenk leads a stellar ensemble, whose touching performances are captured in the original cast album.  Let’s hope this one makes it to Chicago very soon.

Once on This Island:  This year’s Tony winning Best Musical Revival is a bright, splashy musical that combines themes from Romeo and Juliet and The Little Mermaid.  Tony nominee Hailey Kilgore plays a young peasant girl who falls in love with a wealthy boy who lives on the other side of a tropical island.  Although their divided cultures drive them apart, the girl is determined to reunite with the boy she loves.  Originally staged in 1990, the current production of Once on This Island has earned raves for its vibrant energy and uplifting message. 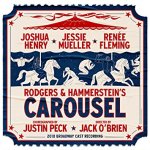 Carousel:  Chicago native Jessie Mueller is truly on a roll, scoring Tony nominations for her lead performances in each of her last three Broadway shows.  Mueller shines in the role of Julie Jordan in the acclaimed new revival of the Rodgers and Hammerstein classic Carousel, about the tragic romance between a troubled carnival barker and a naive young woman.  Joshua Henry plays Billy Bigelow and Renee Fleming makes her Broadway debut as Aunt Nellie.  The cast album will be out in July, so look for it soon in our catalog.  The show was first staged on Broadway in 1945 and is loaded with classic tunes including If I Loved You and You’ll Never Walk Alone.  The 1956 film starring Shirley Jones and Gordon MacRae still delights, and is always worth another viewing. 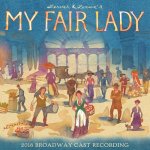 My Fair Lady:  Lincoln Center Theater has created another outstanding revival of a classic musical.  Based on the George Bernard Shaw play Pygmalion, the Lerner and Loewe musical My Fair Lady showcases the relationship between arrogant phonetics professor Henry Higgins and low class flower girl Eliza Doolittle, whom Higgins bets he can pass off in high society simply by teaching her to speak properly.  The score contains some of the best known tunes in musical theater, including Wouldn’t It Be Loverly, I Could Have Danced All Night, On the Street Where You Live and I’ve Grown Accustomed to Her Face.  The new revival stars Tony nominees Lauren Ambrose and British actor Harry Hadden-Paton, who PBS fans may recognize from Downton Abbey and The Crown.  The cast album from the original 1956 Broadway production starring Julie Andrews and Rex Harrison is a classic, as is the Oscar-winning 1964 film starring Harrison and Audrey Hepburn.

Mean Girls:   Comedy master Tina Fey, who honed her craft in Chicago at Second City, has entertainingly adapted her hit film Mean Girls for the Broadway stage.  The musical humorously lays out the perils today’s teenage girls face while navigating their way through public high school.  Fey enlisted the help of her husband, composer Jeff Richmond, in crafting the musical, and their collaboration garnered 12 Tony nominations, including a nod for Best New Musical.  The fact that the show went home empty-handed is no shame given the year’s competition, and the show is just as much fun as the 2004 film upon which it is based.  Here’s hoping that this is just the start of Fey’s contributions to live theater.

Frozen:  It should be no surprise that Disney has again struck gold in adapting one of its beloved animated films for the stage.  The 2013 Oscar-winning film of the tale of the love and devotion between two sisters remains one of Disney’s all-time biggest hits, and its film score has already been memorized by countless little girls around the world.  All that and more are packed into the new family-friendly musical, and if Disney’s other stage adaptations are any indication, this show will be around for years to come.  Caissie Levy and Patti Murin lend their formidable voices to sisters Elsa and Anna in the original cast album.

SpongeBob Square Pants The Musical:  Anyone who has ever had the theme song of this animated cartoon series stuck in their head won’t be surprised to learn that SpongeBob and his pals are prefect fodder for a big Broadway musical.  Chicagoans were the first to witness the transformation of the underwater world of Bikini Bottom to the musical stage, when the show’s pre-Broadway tryout premiered in the city in 2016.  SpongeBob and the rest of the gang have been hard at work perfecting the show in the mean time, and the end result earned 12 Tony nominations, including one for Best New Musical.  The original cast album is comprised of catchy tunes contributed by some of the biggest names in the music business, including David Bowie, John Legend and Cyndi Lauper.  The library has plenty of SpongeBob DVD’s and books on hand for those who want to spend even more time with the absorbant and yellow and porous SpongeBob.