I have always been fascinated by Alaska and the people who choose to live in the remotest parts of the state. This fascination drew me to Kristin Hannah’s memorable new book, The Great Alone, where a girl comes of age in such an 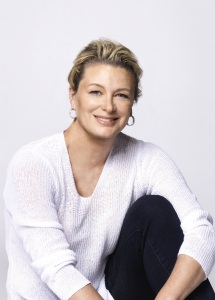 Ernt Albright is a restless Vietnam War veteran and former POW and who takes his anger out on his fragile wife, Cora. Thirteen-year-old Leni’s best friends are books, which provide solace when her parents are fighting. She never feels like she belongs because the family moves around a lot. Ernt’s fortunes change when Bo Harlan, an Army buddy who died as a POW, leaves him 40 acres and cabin in Alaska. Ernt, who cannot hold down a job, believes that living a self-sustaining life is just what his family needs. They soon learn that their new lifestyle requires constant vigilance and work, from hauling water to shooting dinner. 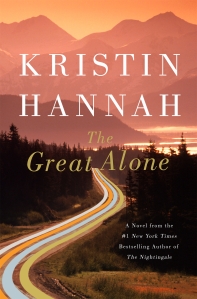 Alaska’s wilderness is a key character in The Great Alone, taking lives while giving back to the survivors with its resources and beauty. Hannah peppers the story with colorful supporting characters who help the Albrights learn how to survive living in the wilderness and the brutal winters. The most memorable is Large Marge, who left her law career years ago and runs the local store. Soon the endless winter nights start taking their toll on Ernt’s mental state, and his fists start taking a toll on Cora. His paranoia is exacerbated by Bo Harlan’s crazy father, who thinks the government is coming to take everything from them. Despite the cruel living conditions both in and out of the cabin, Leni thrives. She attends a one-room schoolhouse and makes her first true friend, Matthew Walker.

Hannah has written an atmospheric, bittersweet novel that is thoroughly engaging. She started out as a romance writer and eventually found her true voice in historical fiction, including two other excellent books, The Nightingale and The Winter Garden. She excels at creating complex characters and describing complicated family dynamics and friendships. I highly recommend The Great Alone.

One thought on “Jo’s Pick of the Week: The Great Alone by Kristin Hannah”