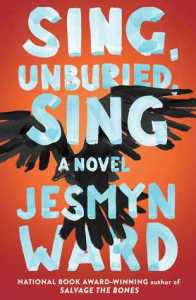 Thirteen-year-old Jojo lives with his grandparents, mother, and three-year-old sister Kayla in a small town in southern Mississippi. His drug-addicted mother, Leonie, is frequently absent, and when she is around, struggles to give her children the care and affection they need. Jojo’s grandparents, Mam and Pop, are really raising the two children. When their father, Michael, is released from Parchman prison, Leonie decides she will bring Jojo and Kayla to pick him up, and the journey they take in Leonie’s battered old car encapsulates everything that is going wrong in their lives: the drugs, the anger, the neglect, the sadness. And along the way, both Jojo and his mother see ghosts – ghosts of young people whose lives were cut short prematurely and who have had a deep impact on their family.

The story is set in a town probably not unlike many other towns in the rural South, ravaged by poverty, addiction, and racism. From this backdrop, Ward brings forth an affecting story that rings achingly true. No doubt it’s because Ward modeled Bois Sauvage, her fictional town, on DeLisle, Mississippi, the place where she grew up and still lives. She has a deep personal understanding of the toll that poverty takes on black families, the way it corrodes relationships and smothers hope. Ward’s writing, told in the vernacular of both Jojo and Leonie, feels authentic and evocative.

The publisher called Sing, Unburied, Sing “Beloved for a new generation.” I can’t say whether that’s true, but I can say that this is a phenomenal, moving book, with so many layers of meaning that I might have to go back and read it again.