A few years ago I came across a quote about Samuel Insull that struck me:

“The town of Libertyville, Ill. was a one-man town, and Samuel Insull once a powerful utilities magnate, was the man. Now that he has been expatriated there is a gap in the community where he was once hailed as the dominating spirit of its material and spiritual life. For many of the 3,873 residents of Libertyville life formerly was Insull-directed. They built homes on Insull real estate developments and sent to an Insull school children born in an Insull hospital. They used Insull light and gas, commuted on an Insull-electric railroad, banked at an Insull bank, and played golf on an Insull course.” — True Republican, 10 Sept 1932

Sounds like he was a pretty big deal and yet if you polled Libertyville residents, it is unlikely many of them would know who Samuel Insull was. Who was this man and how has his legacy shaped modern day Libertyville?

Samuel Insull was born November 11, 1859 in London, England. He was educated in private schools and after a stint with a London auction house, took a position with the London agent of Thomas Edison. He proved himself very useful to the organization and was brought over to the United States in 1881 to serve as Thomas Edison’s private secretary. When many of the Edison companies were consolidated into Edison General Electric in 1889, Insull was made a vice president. A few years later Insull was sent to Chicago to head two of the city’s electric generating companies, The Chicago Edison Co. and the Commonwealth Electric Co.  In 1907 the two companies merged to form Commonwealth Edison Co. with Insull as president.

That same year Insull bought the Barr farm just south of Libertyville. Over the next several years he would buy many of the surrounding farms eventually amassing holdings of around 4,000 acres and naming it Hawthorn Farm. In 1914 work began on an impressive Italianate mansion by Chicago architect Benjamin Marshall and gardens by Jens Jensen which were completed two years later. Today the house is known as the Cuneo Mansion, named after John F. Cuneo who bought the property in 1937.

Now let’s take a look at the original quote one piece at a time.

“They built homes on Insull real estate….”
In November 1923, Samuel Insull, Samuel Insull, Jr., and Joseph C. Reuse formed the Lake County Land Association for the purpose of acquisition and development of area real estate. Around the same time, the group acquired the land formerly home to the One-Mile Track (see blog post Origin of a Local History Reference Quest(ion) for additional One-Mile Track information)  whose heart was located at the intersection of today’s Crane, Carter, and Rockland roads. From this land acquisition, the Libertyville Highlands subdivision was platted and was accepted by the Libertyville Village Board in November 1925. The Lake County Land Association also developed Countryside Lake west of Mundelein. That development and its golf course are discussed later in this post.

The One-Mile Track. Courtesy of the Libertyville-Mundelein Historical Society.

“…and sent to an Insull school…”
A school had existed south of Libertyville on Milwaukee Avenue since the late 1880s. As Insull continued to buy up acreage in the area, the land with the school came into his hands. At some point, the original school became unusable and a brick, one-room school house was built just a bit further south. Most of the children that attended the Hawthorn School were the children of Insull’s farm employees and Insull took great interest in the school. Each day fresh flowers were delivered to the school from the farm gardens and Insull paid for the childrens’ transportation to and from school. By 1919, the school had achieved the rank of Superior School from the state superintendent of instruction based on criteria set by the state. It was the first school in Lake County to reach this level. Insull traveled back from New York to attend the dedication program and stated that the school was one of the joys of his life.

In 1923, Butterfield, Coon, and Hawthorn Schools consolidated to form District 73. A larger, four-room school house (seen below) was built to accommodate the larger student population. The new school sat on 3-acres donated by Insull off of today’s Route 60, east of Butterfield Road. The school went through several additions as the town of Vernon Hills grew up around it. The last remnant of Insull’s school was torn down in 2004 to make way for for Townline Elemetary and the Hawthorn School of Dual Language at Route 60 and Aspen Drive.

Hawthorn School after 1924. Courtesy of the Libertyville-Mundelein Historical Society.

“…children born in an Insull hospital”
When Elizabeth Condell died on August 26, 1917, she bequeathed about $20,000 to Libertyville for the purpose of building a hospital with the stipulation that local residents put forth another $5000. The challenge was reached by conducting a door-to-door subscription drive, collecting donations from community groups, and a dollar-for-dollar matching gift from Samuel Insull. Insull also donated the land on which the hospital would be built. When the 25 bed facility opened in June of 1928, Samuel Insull served as treasurer of the hospital board.  The “sick bay for suburbanites”10 added several large additions over the years and now operates as Advocate Condell Medical Center. The original building was demolished in the early 2000s during one such expansion.

Courtesy of the Libertyville-Mundelein Historical Society.

“They used Insull light and gas….”
When Insull moved to the area, electrical service was limited. Electricity was established in Libertyville in 1897, but only lit streets and homes in town from dusk til dawn. In 1910-11, Insull ran an electrical line from a North Shore Electric station in Lake Bluff to the smaller power plants located near selected farms and small towns, including Libertyville, as a test. The result was 24 hour service for about 23,000 people and lower rates for existing electrical customers. This experiment started the electrification of farms in the Midwest and around the country and the creation of the Public Service Company of Northern Illinois. His utilities empire continued to grow and by the 1930s, Insull had assets greater than $2 billion and his companies produced 10 percent of all the nation’s electricity. Insull expanded his utilities holdings with the acquisition of Peoples Gas Light & Coke Co. in 1913. 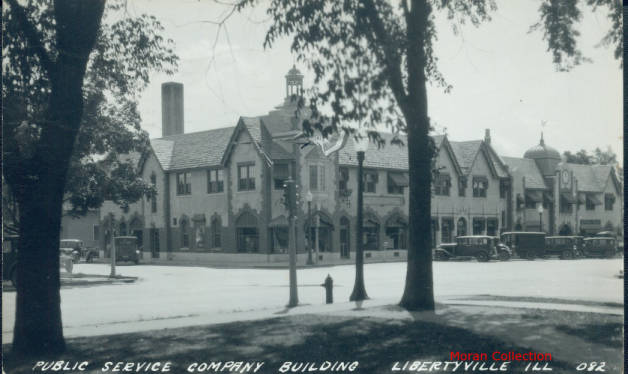 Courtesy of the Libertyville-Mundelein Historical Society.

Insull’s Public Service Company built a headquarters in downtown Libertyville. November 17, 1928 marked the official opening of the Public Service Building located on the southeast block of Church Street and Milwaukee Avenue. Designed by architect Hermann Valentin Von Holst, a noted Prairie School architect of the day, the stucco edifice with brick trim is a  blend of old English, Moorish, and Asian styles.  At the time of the opening, the Lake County Register noted that even decorative elements such as light fixtures and clocks were designed according to the architect’s plans. A rear arcade held a variety of establishments and provided access to a beautifully landscaped courtyard with a lighted fountain. The second floor included eleven business offices and seven kitchenette apartments.

“…commuted on an Insull-electric railroad…”
The Chicago and Milwaukee Electric Railroad built a branch line to Libertyville from Lake Bluff in 1903.  Insull bought the failing line in 1916 and renamed it the Chicago, North Shore and Milwaukee Railway, commonly referred to as the North Shore Line. Within a year, Insull’s management invested over $1 million on improvements and modernization of the line including replacing wooden bridges with steel or concrete, enhanced power distribution and new stations. By 1923, the annual passenger traffic had more than doubled. Along with the construction of a new cut-off route from Niles Center (Skokie) to the Libertyville branch, the three miles between Libertyville and Mundelein were double tracked and opened just in time for the 28th International Eucharistic Congress in June 1926. The Eucharistic Congress’ closing ceremonies held at the St. Mary of the Lake Seminary drew hundreds of thousands of people through Libertyville, many of them arriving on North Shore trains. 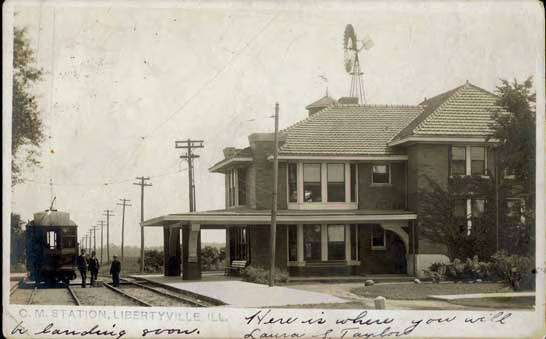 “…banked at an Insull bank”
The Libertyville Trust & Savings Bank opened September 14, 1925 in the Kennedy Block on the southwest corner of Milwaukee Avenue and Church Street (today’s Lovin’ Oven). The president of the bank was Joseph C. Reuse, also part of the Lake County Land Association. C.F. Thompson, vice-president of the North Shore Line, and Samuel Insull, Jr. were a few of the directors. While the elder Insull is not mentioned directly in any of the newspaper coverage of the day, he most likely had a stake in the new institution. The bank appears in Libertyville telephone books through the July 1934 edition.

“…and played golf on an Insull course”
Another of the Lake County Land Association’s large parcels was to become Countryside Lake – located west of Mundelein just past today’s Route 60/83 and south of today’s Hawley Avenue. The beginning of the development of “exclusive country home sites” in 1926 was of great interest to “a large number of wealthy South Chicago business men having already purchased several lots.”16  Lots would only be sold “for high class residences and is highly restricted.”16 Interest in the properties was surely enhanced by the recent extension of Insull’s North Shore Line railroad to Mundelein, just a little over two miles from the exclusive location, providing easy access to and from Chicago. Samuel Insull built a hunting lodge on an island of the lake which still remains today.

The Countryside Lake Association was established in June 1926 to make improvements to the land including the damming of a stream running through the property in order to form the lake. A nine-hole golf course was laid out on the northeast shore. According to a Lake County Register article announcing the development “the topography of the site selected for the course is hilly and considered ideal by golf experts. Four of the fairways will overlook the lake.”16  The Countryside Golf Course was the first public course in Lake County. It is now operated by the Lake County Forest Preserve.

Insull sounds like quite the guy, so why is he forgotten? While he survived the initial hit of the 1929 stock market crash, heavy borrowing over the next couple of years put him in a precarious position. Eventually his empire faltered in 1931-1932. Insull had lost everything and so did his investors. He was accused of financial mismanagement. He was indicted while living in exile in Paris. He then moved to Greece in an attempt to avoid extradition. Eventually he was returned to the United States and stood trial in 1934-35. Although he was acquitted on all charges, he died from a heart attack with little to his name in 1938 while in a Paris subway.

While memories of the man have faded, many of his contributions to the Libertyville area are still around. You can even get a glimpse of the man himself in the Ansel B. Cook Home where a large portrait of Insull, formerly hung in the Hawthorn Farm offices, is on display in the second floor study.

One thought on “One-Man Town”