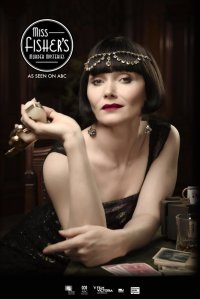 Earlier this year, I was obsessed with one of the most popular shows on Netflix, Miss Fisher’s Murder Mysteries. Having finished all three seasons – with no more on the horizon – I decided to get my fix by reading mysteries set in the same time period. Of course the first place to start is the series on which the shows are based: the Phryne Fisher books by Kerry Greenwood. They’re all available at Cook Park Library. And here are a few more:

The Amory Ames mystery series by Ashley Weaver starts out with Murder at the Brightwell, set at a British seaside hotel in 1932. Amory is a plucky, clever young woman who finds herself solving a murder among the Brightwell’s well-heeled guests. Her rakish husband, Milo, turns up at opportune moments to help with the case. This is a charming, atmospheric book with a strong, likeable heroine and a love triangle to boot.

The Kate Shackleton mysteries by Frances Brody follow Kate, a World War I widow, as she unravels murders in the British countryside. Kate, a former nurse, is an intelligent, complex, independent woman, and the mysteries are well-plotted. In the first book, Dying in the Wool, Kate searches for a missing woolen mill owner outside the city of Leeds.

The Josephine Tey mysteries by Nicola Upson star the real-life playwright and crime writer Josephine Tey. In the first book, An Expert in Murder, Josephine teams up with her longtime friend and Scotland Yard detective, Archie Penrose, to solve a series of murders in London that are connected to her hit play.

Last but not least, try the Royal Spyness mysteries by Rhys Bowen. Lady Georgina is titled but penniless, a modern young woman bumping up against tradition. She’s smart, witty, and a great sleuth. The first book, Her Royal Spyness, has Georgina figuring out who killed the Frenchman who was trying to buy her family’s Scottish estate.