Welcome back to what is a much, much more uplifting entry in my series on the history of Mundelein! When we left off in my last post, the year was 1950 and having weathered the trials of the Great Depression and Second World War, things in Mundelein were finally beginning to look up: New businesses were opening all over town, the housing market was picking up, and the first Mundelein Days were being celebrated. From the staunch 50s to the groovy 70s, we have a lot to cover, so let’s see what changes the second half of the 20th century brought to my hometown!

By the early 1950’s, Mundelein was experiencing the same post-war economic boom as the rest of America. Thanks to the revenue generated by new businesses such as Ball Company (1950), Fairhaven Pharmacy (1956), and Frank’s Shoe Repair (1958), the village began, with the help of occasional lobbying on the part of concerned citizens, to expand the scope of its services.

One of the first areas that saw substantial improvement was the Mundelein Fire Department. In 1951, the department undertook what would be the first of a series of renovations for the fire station, adding a second story that provided firefighters with a kitchen, social room, and additional storage space.  A year later the fire department acquired a rescue squad (financed by a St. Patrick’s Day dance the preceding year) that provided basic first aid while transporting sick or injured residents to the hospital, which up to that point had been handled by the local funeral home. Looking through the Libertyville-Mundelein phone books published in the 1950’s, I noticed that Mundelein’s first funeral home, Burnett & Kristan Funeral Home, which also advertised its “private ambulance service,” did not open until 1954. Since the Libertyville Fire Department had a contract with the McMurrough & Kopp Funeral Home to provide emergency transport prior to the purchase of the rescue squad, my guess is that the same held true for the Mundelein department.

In May 1953, the fire station was the site of the 27th Lake County Firemen’s Association conference, which saw fire departments from across the county compete in fire engine inspections and hose fights. Later in the decade, on January 1, 1959, the Mundelein-Countryside Fire Department split into the Mundelein Fire Department and the Countryside Fire Protection District respectively.

Two other important developments came in the middle of the decade. The first came on September 15, 1954, when after petitioning by a group called the Mundelein Recreation Council, residents voted on a referendum for the creation of a park district. The measure passed easily with 432 in favor to 210 against. Almost three years after the referendum in 1957, the Mundelein Park and Recreation District began operations. Over the next 27 years, the district acquired more than 202 acres of land, establishing 22 parks, along with a beach located on the site of the Ray Bros. Pavilion on Diamond Lake.

The second, and the one closest to my (librarian) heart, occurred on April 5, 1955, when the residents of Mundelein held, and more importantly passed, another referendum to establish a “free public library.” Eight months later on December 2, 1955, the Fremont Public Library opened its doors. Located at the corner of Lake Street and Park Avenue and operating out of a rented storefront. For the first year of its existence Fremont relied on borrowed funds because the tax money promised would not be available until the following fiscal year. Starting out with only 4,000 items and an all-volunteer staff, with the exception of the first head librarian, Miriam Peaco, the library flourished, becoming one of the first libraries in the state to establish inter-library reciprocity.

By the late 1950’s, with a growing economy and population, Mundelein saw the establishment of a number of local clubs and youth groups. For the adults of Mundelein, there was the Mundelein Lion’s Club as well as the Men’s Garden Club of Libertyville-Mundelein, where exciting discussions on “New things for the Garden” led by a very droll Gordon Ray were held. For younger residents, there were various sports teams like the Babe Ruth League and the Boys’ Softball League as well as Brownie and Girl Scout troops. Around this time, there was a renewed interest in local history. This led to the founding of the Libertyville-Mundelein Historical Society in 1955 and the Historical Society of the Fort Hill Country a year later in 1956, which takes its name from a prominent hill near Peterson and Alleghany roads in Fremont Township.

Mundelein in the 1950’s was not all fun and sepia-toned nostalgia, however. With the threat of “The Bomb’’ looming over them, starting in early 1951 under the auspices of the newly established Civil Defense Administration, residents of Mundelein took part in regular civil defense drills.  In May 1955, as if to demonstrate how serious the possibility of nuclear war was taken, Richard Minehart, the Civil Defense Coordinator for Mundelein, announced plans to issue ID tags for all “children and adults” of Mundelein that would “provide identification [in case of] air attacks.” (Independent Register 1955, p. 17). On a slightly less bleak note, thanks to the rising worry over juvenile delinquents, the teenage population of Mundelein during the 1950’s had to contend with an 11 p.m. curfew aimed at preventing the youth of the town from running amok.

The 1960s saw the continued growth of Mundelein, which by the beginning of the decade had a population of 10,526. In February 1960 the Mundelein News, in one of its last articles before Albert Hagerty sold it and the paper was renamed the Fremont Patriot, reported on the construction of Mundelein High School. Located on the corner of West Hawley Street and North Midlothian Road, the school opened its doors for its first class of 921 students September 17, 1961, who before then had attended either the Libertyville-Fremont Consolidated High School or, if they lived in Fremont Township, the Grayslake High School.  In addition to the high school, in September 1962 Mundelein saw the opening of another school, the Carmel Catholic High School for Boys, followed a year later for the opening of its sister school, the Carmel Catholic High School for Girls. 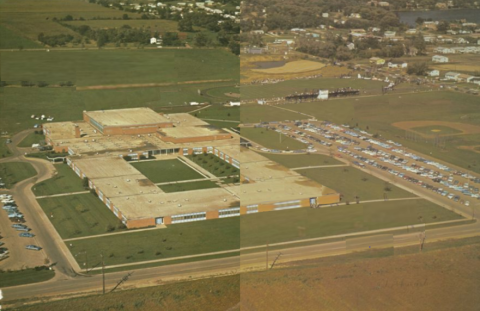 Despite this growth, fewer and fewer of Mundelein’s residents, a town once held up as the ideal commuter town, were using the North Shore Line to get to work. This was due to the ready availability of cars and the construction of the interstate highway system, a trend only accelerated with the completion of the Northwest Expressway (now the Kennedy Expressway) in late 1960. By this point the North Shore Line was losing 46,000 passengers a month and after years of declining ridership and lost revenue, the North Shore Line finally gained permission from the Interstate Commerce Commission Examiner on December 10, 1962, to abandon the line, on the condition that no buyer stepped forward within 35 days. Residents of Mundelein, then-Mayor John Noel, and the North Shore Commuters Association did their best to become that buyer, walking through the train’s cars with cans soliciting donations. Their best was not enough however and the North Shore line turned down their $2.5 million offer. So on January 1, 1963, at 4:01 am, Mundelein, a town that had been built on trains, even changed its name to Rockefeller to gain the favor the man behind the SOO Line, saw the last Chicago, Milwaukee, and North Shore train passes through town.

Life in Mundelein went on with the construction of a new police station just across the street from the fire station on the corner of Seymour Avenue and Division Street in 1964, finally allowing the police department to move out of the village hall. In 1967, the Mundelein Park District saw two major developments:  the construction of an outdoor pool at Mundelein High School and a new administration building located just off North Seymour Avenue on land donated by A.C. Kracklauer.

By the early 1970’s, Mundelein was home to more than 80 major businesses, a steadily growing housing market, and almost 2,182 acres of parkland to its name. In 1972, the Fremont Public Library gained recognition for becoming the first library in Illinois to convert from a township library to a district library.

However, the main event of the 1970’s in Mundelein was the wildly successful two-day Mundelein Business Expo. Held at Mundelein High School on March 30-31 with 35 local business and industries in attendance, the expo was designed to highlight the products and services of local businesses and to increase public awareness of entrepreneurial opportunities in Mundelein. Drawing crowds of between 1,500 to 2,000 people, including a curious then-Mayor Gilbert Stiles of Libertyville, the expo was recognized by City Hall Digest as an “outstanding public information project,” winning second place in the under-50,000 population category. Thanks to the interest by businesses sparked by the expo, the village issued more than $6 million in industrial construction permits over the next year. 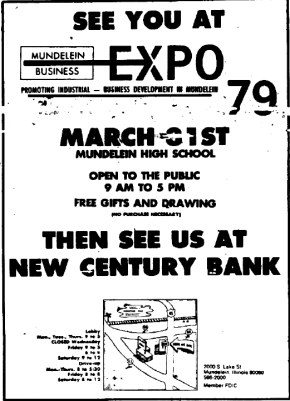 Mundelein Business Expo ’79 advertisement. Courtesy of the Village of Mundelein.

The next month on April 26, 1979, the “computer age [came] to Mundelein,” with the opening of ComputerLand, the first computer store in town. Although the stores owner, Ted Essex, understood the these new “micro” computers were only limited by “the imagination,” I doubt he had any idea of just how important the machines would become in the decades to come (Independent Register 1979, p. 6). But that will have to wait until my next post. Join us next time as we cover Mundelein, from the acid-washed 80s and the totally radical 90s, all the way to that far-off future year of 2000!

Grossman, Ron. “All aboard, one last time: 50 years ago, a once-thriving era of interurban train travel ground to a halt.” Chicago Tribune, January 13, 2013.