In the previous Ansel B. Cook post, we followed Ansel B. Cook’s rise in Chicago business and politics. While the 1870s were a high point in the life of Ansel B. Cook, the 1880s and 1890s would prove to have ups and downs, particularly in his personal life. In this post we will take a  look at the significant events over the last 20 years of his life.

The 1870s ended on a high note with the 1879 marriage of Ansel’s daughter Ida to Dr. Albert Bliss Strong, a professor at Rush Medical College. The bride wore “a dress of cream-colored ecru silk, cut en traine princess, lace trimming and white bouvardia and tea rose buds, surmounted with a veil.”1 The ceremony was held at the Cook residence at 380 W. Adams, Chicago with family and friends is attendance. (Due to a street re-numbering in the early 1900s, this is further west than one might think. The house would have stood west of Racine Avenue in the vicinity of toady’s Whitney Young Magnet School.)

The 1880s had a joyful beginning with the birth of Ansel’s first grandchild, Albert Cook Strong, son of Ida and Albert. Unfortunately, tragedy would soon strike.

On the night of January 20, 1881, Helen and Ansel were aboard a train from Chicago headed to their Libertyville home to visit friends and go sleighing. The train was just leaving the Oak Glen station (17 miles north of Chicago) when Ansel and another passenger stepped to the rear of the car and looked out the window. They saw an express train coming, but assumed it would slow down. It did not. Ansel just had time to jump from the car when he realized a crash was imminent. The express train locomotive rammed in to the passenger car tearing it to pieces and pushing it along 30 rods (about 165 yards) until both cars stopped.

The waste pipe of the locomotive burst and boiling hot water poured into the wreck. Mrs. Cook was drenched by the water and severely burned on the hands, arms, face, and back. Helen  received temporary assistance from a physician on the scene and was then brought to her Chicago home about 4am the next morning where she was attended by her son-in-law Dr. Strong. A few minutes before noon on January 21,  “she sank, and calling on her husband to raise her up, she expired in his arms.”4 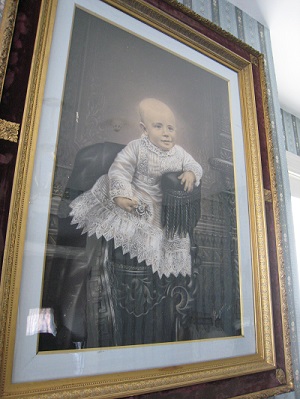 Albert Cook Strong, 1881. On display in the Ansel B. Cook Home, Libertyville, IL.

Despite a terrible 1881, Ansel moved on. On February 12, 1882, Ansel took a new bride, Annie Barrows of New Hampshire. Annie was the first cousin of Ansel’s brother Charles’s second wife, Jennie Wade. (Jennie’s mother, Sophronia Smith Wade, and Annie’s mother, Lydia Smith Barrows, were sisters.) Little is known about the rest of this decade which started out so horribly, but the 1880s ended with Ansel’s retirement and return to Libertyville to live out his days.

Annie’s time in Liberytyville was cut short by her death in 1891 of heart failure. In an obituary she was remembered as a “graduate of a noted eastern institution of learning” and an “extensive reader…an honored member of several of Chicago’s best literary societies” and a “very talented amateur artist.”8 Within a year, Ansel married again – this time to Emily Barrows, Annie’s younger sister.

Though away from the hustle and bustle of  Chicago, Ansel did not sit idle. In 1894 he served as Chairman of the Building Committee which erected the new Town Hall, now the American Legion Hall. He also served as Chair of the Lake County Republican Convention. When not busy with those tasks, he could be found trading tales with the locals at the Colby general store. 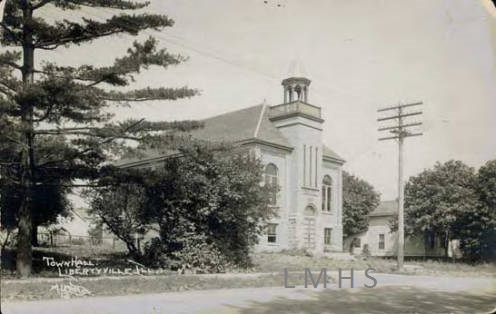 He may also have been considering his legacy. A May 25, 1894 item in the Lake County Independent argued that the town of Libertyville was much in need of a public library. The writer put forth a challenge to “some of our wealthy professional men, or ex-legislators, or bank cashiers, or candidates for county treasurer…to courageously step forward and…by donating a round thousand dollars to the Cook (?) Library – Let the first liberal donor have the name….”10  Not six months later,  Ansel’s will, dated  Dec 15, 1894, made provisions for the “building of a Memorial Hall in the village of Libertyville, Lake County, Illinois, to be known as the A. B. Cook Memorial Hall, with a free-library therewith”11  upon the death of his wife Emily Barrows Cook. Coincidence?

The paper on June 10, 1898 reported that Ansel had been: “seriously sick for several days [and] is no better. Mr. Cook is suffering with chronic kidney trouble and last week a Chicago physician was called in consultation. Little encouragement is given to his ultimate recovery.”12  He died that day and was buried in Graceland Cemetery in Chicago. While a Cook Memorial Library was eventually established, it didn’t quite work out as Ansel had envisioned it.

Although Ansel’s will  provided that the property was to go to the Village after Emily’s death, there was a large mortgage against the property which Emily Cook paid off with her own money and therefore she owned the property outright. Legally, she was free to dispose of the property in any manner she wished. A 1946 letter written by Mabel MacGuffin, a member of the first library board, explains what happened next. Mabel’s sister was in library school from 1911-1913 at the University of Illinois and conducted a survey of library needs in Libertyville. As the MacGuffin and Cook families were close, Mabel’s sister had seen the interior of the Cook home often and drew up a sketch of the house as a library. Mabel took the suggestions to Mrs. Tamson Monroe, Emily Cook’s sister who often lived with her, who easily persuaded Emily of the advantages of this and the honor it would bring to the family. Emily agreed and made provisions for the home to be utilized as a library and the grounds as a public park upon her passing.

Emily Barrows Cook outlived her husband by over 20 years. She passed December 7, 1919 after a week of pneumonia. The house and land was deeded to the village in July 1920. Since no funds were provided to convert the house to a library, money had to be raised in order to stucco the building, build the colonial pillared porch and make other necessary improvements worthy of a public building.  The Cook Memorial Library opened with a public dedication in November 1921. 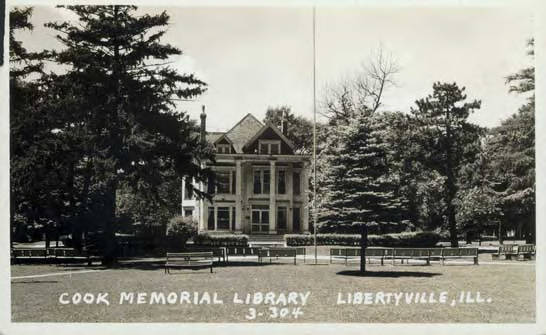 Over three posts, we’ve explored the life of Ansel B. Cook from his birth in Connecticut, to his migration to Illinois, to his rise in business and politics, to his death and beyond. While a lot of information has been conveyed, it can be difficult to get a sense of the character of a man from a recitation of dates and facts. So to wrap things up, I’ll leave you with a couple of quotes from people who knew him.

“We all looked up to him as a big businessman. He had a lot of influence and was always interested in public affairs”9 – J.B. Morse

“The simplicity, honesty, integrity, and thrift of his New England forefathers were reflected in his every action. His fearlessness as a leader in every struggle for the right, as he saw the right, his abiding faith in the principles and constitutional freedom that had made America great……In the quiet of his beautiful home he became a most hospitable host.” –James Woodman, Independent Register, May 18, 1944.

Ansel B. Cook with dog, circa 1890. Courtesy of the Libertyville-Mundelein Historical Society.