January and February are the months when I try to catch up with books that I hadn’t gotten to in the previous year. I just read two mysteries published in 2016 that are worthy of note, one by a favorite mystery author, Julia Keller, and one by a debut author, Shaun Harris. 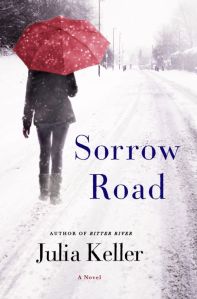 I really enjoy Julia Keller’s mysteries because her novels are full of beautiful prose and fine character development. Set in West Virginia, they shine a light on the troubled area where Keller grew up, a setting of natural beauty beset with unemployment, poverty and drug abuse.

Prosecutor Belfa Elkins was one of the rare residents who escaped Acker’s Gap, got a law degree, and decided to come back to make a difference in her troubled home. In Keller’s fifth book, Sorrow Road, Bell starts looking into whether there is something suspicious about the deaths of a high school friend’s father at an Alzheimer’s nursing facility. In the meantime, Bell’s grown daughter, Carla, comes home to Acker’s Gap to face her troubled past. Carla, who as a high school student witnessed the murder of her best friend before she was kidnapped and almost killed herself, is struggling with haunted memories. I enjoy reading mysteries where the protagonist has to face family problems as well as solve murders, and the relationship between Bell and Carla is complex and interesting.

If you haven’t read Keller’s books yet, I would start with the first of the five-book series, A Killing in the Hills. Keller has come to our library twice to speak as part of our Authors Out Loud series, and she was one of the best speakers we have ever had. Her writing reflects her depth of knowledge and insight about life.

The Hemingway Thief by Shaun Harris 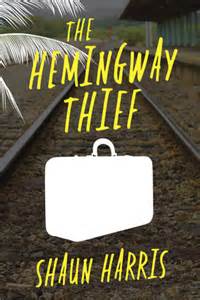 Ernest Hemingway famously lost all his early, unpublished stories in 1923 when the suitcase containing them was stolen from a Paris train station. Hemingway’s wife, Hadley, was taking the writings to her husband when she decided to buy a bottle of water and left the case unattended. The suitcase filled with Hemingway’s words never was recovered.

Who was the thief, and do the works still exist? That question is explored in a romping, fun debut novel by Shaun Harris. Novelist Henry “Coop’’ Cooper is burned out writing his Scottish vampire mystery series and takes a vacation in a run-down resort in Mexico. When a drunk is accosted by a couple of tough guys, Coop helps hotel owner Grady to save him. The drunk turns out to be a two-bit con man named Ebbie Milch who has stolen what is supposedly the first draft of Hemingway’s A Moveable Feast, which might contain clues to finding the missing suitcase. Soon Coop, Grady and Milch take a dangerous trip  deep into the land of outlaws while being chased by an elderly used book dealer and a female hitman.

The Hemingway Thief is filled with colorful characters and will appeal to readers who like amusing, fast-paced capers.