Seeing as Oscar season is upon us, I thought this would be a great opportunity to delve into the history of the best place in town to catch up on those flicks all your friends are talking about and you’ve been-really-meaning-to-see-but-haven’t-had-the-time: the cinema! Specifically, we are going to examine the long and happy history of the Liberty, a theater which has been a landmark in the town for which it was named since the late 1930’s. So, without further ado, let’s all go to the movies!

Starting in the early 20th century,  there have been several theaters that at one time or another served the Libertyville: the Lyric Theatre, an earlier version of the Liberty Theatre,  and the Auditorium Theatre. The immediate predecessor of the current Liberty Theatre, the LaVilla Theatre, was located on the second floor of the First National Bank building (home of Dancecenter North in 2016). However, the LaVilla had only hardwood seating and a screen which would roll up when not in use. One can imagine this did not meet the standards that the movie-going public of Libertyville was coming to expect. 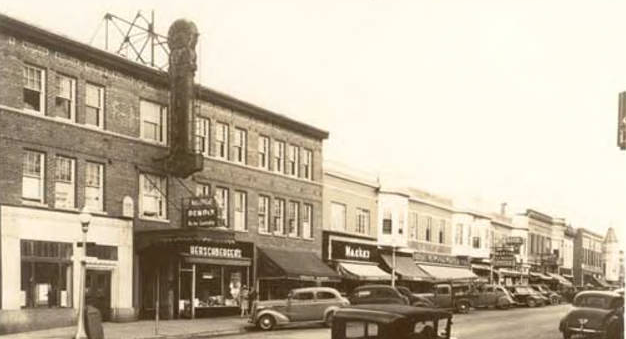 Into this picture stepped Frederick William Dobe. Born in Germany in 1873, Dobe had immigrated to the United States at age 19 in 1892, eventually settling down in Libertyville. Noticing that while the small theater on Milwaukee Avenue served its purpose, there was a desire on the part of the townspeople for a dedicated theater. Sensing a potential business opportunity, but not yet ready to commit himself, Dobe polled the community to see if they were happy with the existing theater. Finding that the people of Libertyville were indeed looking for a more luxurious movie going experience, Dobe contracted Chicago-based architects Edward P. Rupert and William L. Pereira to design a theater befitting a town of Libertyville’s stature. 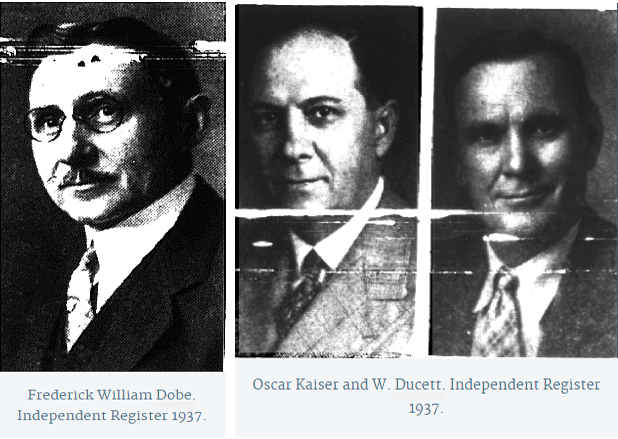 The design that was eventually settled upon was a theater built in the art modern style with a cream terracotta exterior, dark blue trim, and a stunning vertical art deco sign. Able to seat 706 customers (44 fewer than promised on the sign below), the theater boasted the most up-to-date amenities. Construction on the theater began on Friday April 9, 1937 with the work contracted to the Kaiser-Ducett Company of Chicago. 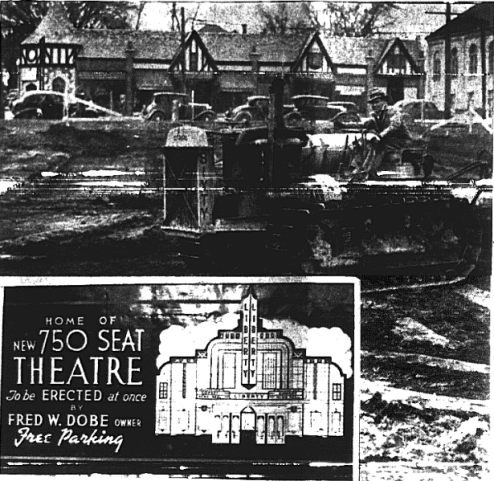 The Liberty under construction. Independent Register 1937.

In the weeks leading up to the Liberty’s opening, the entire town got into the spirit, with stores decorating their windows and having “Theater opening sales”, light posts in the business district decorated with red, white, and blue bunting, and almost the entire issue of the August 26 Independent Register dedicated to the theater’s opening. Finally, on Friday August 27, 1937 the theater opened. Playing to a “capacity crowd” with a large number of would-be customers being turned away, Frederick Dobe was at the front of the line, buying the first ticket to the theater. As the audience filled in, they were met by Mark Fisher, a popular Chicago band leader, who acted as the master of ceremonies that evening. After Fisher came a short speech by A.E. Suter, President of the Village Board, to an audience that, as one can imagine, was probably impatient for the movie, The Slave Ship staring Warner Baxter and Elizabeth Allan, to begin. 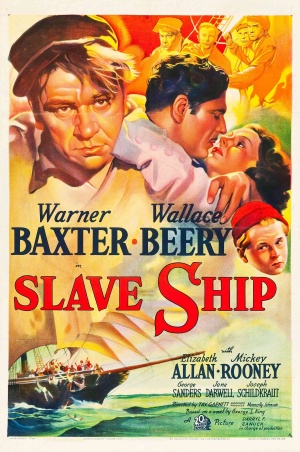 The theater quickly became the go-to place for kids to hang out on weekends. According to Marylyn Alkire of the Libertyville-Mundelein Historical Society, in the 1940’s kids would go to the penny candy store just south of the Liberty, which is now the site of the Green Room, buy a pocketful of candy, and then hurry back to the theater where they would buy a movie ticket for 20 ¢. Once in the theater, they might have been escorted  to their seats by a young  Marlon Brando, who worked at the theater as an usher during the short time he and his family lived in Libertyville (Summer of 1938-spring of 1941). The films they would have watched ranged from western to Capsule news stores, on-location newsreels produced by Time Inc. 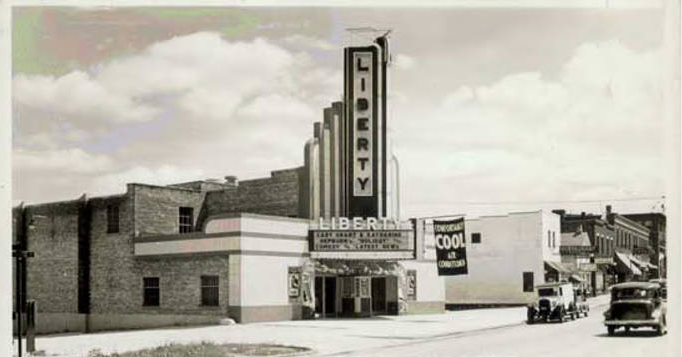 Those newsreels took a dark turn as the United States entered World War II. As Ms. Alkire remembers, the theater would have regular blackouts in the middle of movies, leaving the children in the audience to wait impatiently until the movie started up again. The manager during the 1940’s was Robert L. Collier. Born in Peoria he was a well-known business man, avid bowler, and during the blackouts was known to send uniformed ushers to keep the kids in line.

Even as the kids endured the blackouts, Americans of all walks of life were banded together to support the war effort, and Hollywood celebrities were no exception. This was the reason that on September 3, 1942, famed actor James Cagney, known for his energetic performances, and deadpan comic timing, visited Libertyville as part of an effort to sell war bonds. Drawing a crowd of some 4,000 at Cook Park (according to the 1940 census the population of Libertyville was 3,930) Cagney gave a speech about the virtues of supporting the war effort by buying war bonds. It must have been a very inspiring speech since by the time he left the steps of the Cook Memorial Library, which was at the time located in Cook House, the town had pledged nearly $111,000. 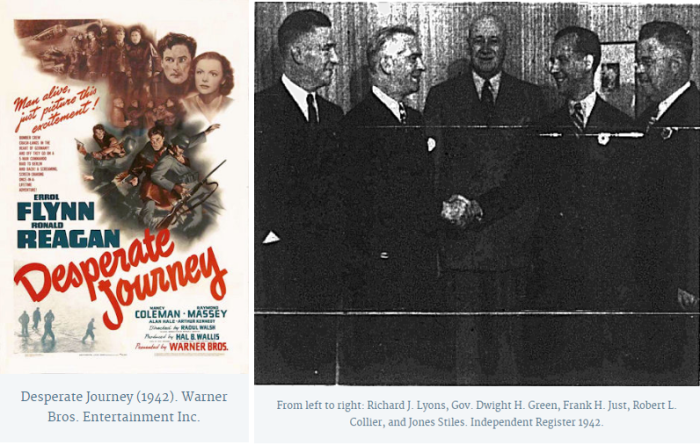 As a reward for the town’s patriotism, Liberty was chosen to be the location of the world premiere of “Desperate Journey”, a film about a group of downed Allied airmen making their way out of Nazi Germany staring Errol Flynn and (Future President) Ronald Reagan. As part of the ceremonies, then Illinois Governor Dwight H. Green drove a horse-drawn carriage, loaned to him by publishing magnate John F. Cuneo, up Milwaukee Avenue.

After the war, in 1948 Frederick Dobe followed up the Liberty with the construction of a second theater, the Grayslake Outdoor Theatre, located along Highway 120 East at Route 83. The Libertyville continued to be a popular destination for the citizens of Libertyville, although at some point after 1955,  the art deco sign that had for so long beckoned moviegoers of all ages was taken down. In 1960 on Saturday, June 18 at the age of 87, Frederick Dobe passed away at St. Therese’s Hospital in Waukegan.  He was interred at the Ridgewood Cemetery in Des Plaines. 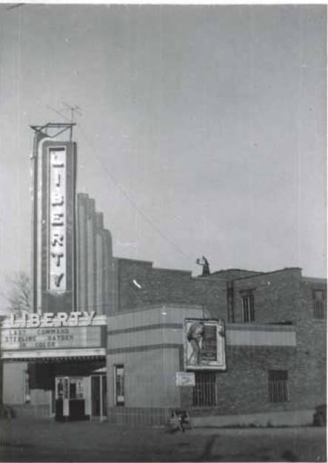 The Liberty Theater, 1955. Photo by Carl Cizek. Courtesy of the Libertyville-Mundelein Historical Society.

The show, however, must go on. In 2012 the theater was bought by  Scott Dehn, who oversaw a major renovation of the Liberty, including the purchase of two digital projectors, costing about $130,000 total. The theater had a grand re-opening early that same year. Today the Liberty, now under the ownership of Golden Age Cinemas, which also owns the McHenry Outdoor Theater, is still there and still plays host to moviegoers of all ages. It also provides the popcorn that the library serves at our weekly movie matinees! Join us next month when we look at the career of Marlon Brando, who lived in Libertyville from 1938-1941 (so I get to write about him)!.

6 thoughts on “Let’s all go to the movies: The storied history of the Liberty(ville) Theater”