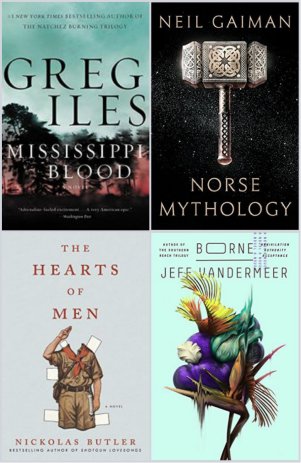 Much like the end of a year will bring about multiples lists of the best books that were released that year, the beginning of a year generally has its fair share of lists that those in the book world are looking forward to reading. Of course we peruse those lists, not only for the library, but to see what exciting titles are expected this year that we personally want to read.

As for us, we’re looking forward to quite a few. Lindsay can’t wait to read Borne by Jeff VanderMeer (he wrote the Southern Reach trilogy that won many an award). Ellen is looking forward to Mississippi Blood by Greg Iles, the next book in the Penn Cage series. Jo is anticipating to The Hearts of Men by Nikolas Butler and What You Break by Reed Farrel Coleman (book two in the Gus Murphy series). Becky is excited about  The Dry by Jane Harper and Idaho by Emily Ruskovich (two titles with twisting plots). Jocelyn is looking forward to Norse Mythology by Neil Gaiman (as are many other staffers!).

If you would like to start your own “Anticipated Titles” list, take a look at some of the lists below to get an idea of what will be published in the first part of 2017.

The Millions – This bi-annual list (there’s one at the beginning and the middle of the year) features a great mix of literary fiction, non-fiction and some under-the radar titles to look forward to. You might be adding quite a few of these titles to your TBR (to be read) list.

BookRiot – A diverse listing covering many different genres including a couple of young adult and middle grade titles. You can narrow down the list by clicking on the genres listed to the left on their site.

Entertainment Weekly – A magazine that’s tapped in to the entertainment world is bound to have a grasp on good titles coming out this year and the 23 titles listed here make that evident.

Time Magazine – Not as long a list as others, but still full of great reads to take you all the way through November.

GoodReads – A compilation of popular titles that GoodReads users are anticipating from this year. Also quite handy if you already have a GoodReads account, you can just click “Want To Read” to add to your list!