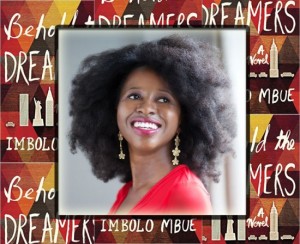 The United States is a nation filled with people whose ancestors came from another country. My own father came to the United States from his home on the Danish island of Bornholm in the 1920s. He was only 16 at the time, and took a ship with his brother across the Atlantic to join his parents, who had traveled before them. I sometimes imagine how scary it must have been moving to a new country, learning a foreign language and adjusting to different rules and customs. My father never wanted to talk about that experience, and unfortunately he died before I could encourage him to open up about that time of his life.

I think his story always draws me to novels about immigrants who risk everything to come to a new country seeking better lives. I read one such book this month that I highly recommend called Behold the Dreamers by Imbolo Mbue. Behold the Dreamers is a modern-day immigrant story about a family from Cameroon drawn to America with its hopes and promises. Jende and Neni Jonga move with their 6-year-old son to a roach-infested apartment in Harlem. The year is 2007, shortly before the country faces economic disaster. A cousin helps Jende find a job as a chauffeur for Clark Edwards, a well-to-do executive at Lehman Brothers. Neni, who is going to school with the dream of becoming a pharmacist, is offered housekeeping work with Clark’s wife Cindy.

The Edwards seem like the perfect married couple living the American dream. But both Jende and Neni begin to discover that the Edwards aren’t as happy as they appear to be on the surface. Soon the tension from the affluent Americans’ lives spills into the marriage of the Jongas. Jende also is consumed with worry that he will be deported to Cameroon if his asylum appeal is denied.

Behold the Dreamers looks at the American Dream from a fresh, heartbreaking perspective. Imbolo Mbue, who is originally from Cameroon and has lived in the United States for more than a decade, is a natural storyteller. Her first novel brilliantly explores the issues of race, class and culture.