“Two months of darkness,” Faye says. “How do you bear it?” 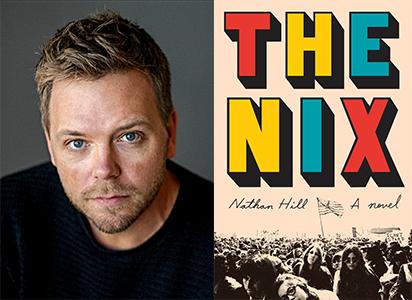 As Samuel remembers it from his mother’s stories, a Nix is a Norwegian spirit which appears as a white horse in your life and when it disappears, it takes a piece of your heart along with it. Although Samuel dimly remembers his mother’s stories, he vividly remembers that his favorite books as a kid were the “Choose Your Own Adventure” series.  When the reader first meets him, Samuel is a failed writer and a lonely and burned-out adjunct English professor who wishes that he could start his own story again and choose a better path. Then, out of the blue, his mother who had walked away from the family when Samuel was six, reappears and needs his help to avoid prison.

The Nix, a debut novel by Nathan Hill takes the reader on Samuel’s journey to learn who his mother really was and has become and along the way, he must also re-examine his own life and the choices he’s made. In order to make their peace, Samuel and his mother must travel separately to Iowa, Chicago, New York and Norway to visit the people who had known them before and could help fill in the gaps in their understanding of themselves and of each other.

I thoroughly enjoyed taking the journeys with both Samuel and his mother and, as I read, I found myself reflecting on my own unique path to adulthood and how each place, person and choice I made has determined who and where I am today. It left me wondering as well, if I were given a ‘do-over’ button, would I really hit it? Is happiness a consequence of all the actions we’ve taken over a lifetime or simply a decision that we make to accept what is rather than mourn what might have been?

The Nix is a long book and I would highly recommend it for readers who like to become totally engrossed in books and the lives of their characters. This would be a good book to savor during the long, cold, dark winter nights after the holidays.