In about 1892 the small village of Libertyville (population 800) was poised for growth, but one ingredient for success was lacking: a sound financial and banking system. At that time there were only two banks in the whole of Lake County and they were both east of the Des Plaines River: First National Bank in Waukegan, also known as the “Steele Bank,” and the D. M. Erskine & Company Bank in Highland Park. Libertyville’s farmers were doing a booming grain and livestock business, thanks in part to the railroad which connected Libertyville to Chicago, and now the town needed a financial institution of its own.

To this end, five businessmen pooled their resources and opened the first bank in Libertyville under the name of Wright, Parkhurst & Co. on April 3, 1892 in a small frame building in the 500 block on the west side of North Milwaukee Avenue. The five founders were Caleb Wright (Cashier), G. A. Wright (Vice President), C. F. Wright, F. P. Dymond (President) and W. E. Parkhurst. Shortly after the bank opened, Mr. Parkhurst sold his interest to the other partners and the bank became known as Wright, Dymond and Co. Just two years later, they built and occupied a building on the northwest corner of Milwaukee Avenue and Cook Street and changed their name to the Lake County Bank.

In 1903 another bank in town opened up, the First National Bank. This bank was founded by H. G. Gardner who hailed from Titonka, Iowa. Although many of the founding persons were from out of state, several Libertyville men were involved in setting up this new bank. Interestingly, as plans for the First National Bank were being made, Libertyville’s other bank converted into a national bank and became known as the Lake County National Bank. A little friendly competition, perhaps, between the two banks in town, which only served to strengthen each of them. 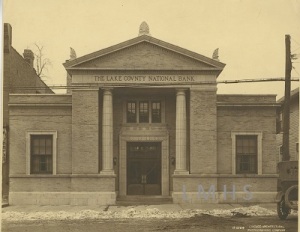 Competition must have been good for the two banks; in 1922 the Lake County National Bank had built impressive new quarters, “worthy of being called a bank,” at 507 North Milwaukee Avenue. 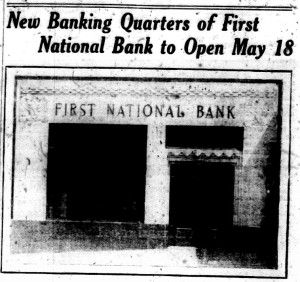 Meanwhile, up the street, the the First National Bank remodeled their building in 1929, calling it “one of the most modern banking houses in northern Illinois.” Today we recognize it as the building that houses Libertyville’s downtown Starbucks.

During the boom time that was the ‘twenties a third financial institution, the Building and Loan (later called the Libertyville Savings and Loan) also opened its doors. The Building and Loan was organized to provide the “man of moderate means…the facilities for becoming a home-owner.” Their doors first opened on June 15, 1927 in the building that is now Lovin’ Oven. In 1928 they moved their offices across the street to the Public Service Building.

Libertyville’s banking history is not all name changes, dates, and mergers. In his 1970 talk before bank shareholders, Robert Dunn shared an amusing incident related to him by Mrs. G. Carroll Gridley. Here is Dunn’s recounting: “When her husband Mr. Gridley was in the First National Bank there had been a warning sent around to all banks that there were bank robbers posing as bank examiners. This one morning when Mr. Gridley went to work he discovered two men at his door purporting to be bank examiners. He invited them in and steered them into a back room where they were to hang their hats and coats. After the two gentlemen were inside the room, Mr. Gridley slammed the door closed locking them in. Mrs. Gridley recalls that Mr. Dennis Limberry, who was Chief of Police at that time, was notified by Mr. Gridley, who in turn notified the “Home Guard.” The Home Guard consisted of merchants along Milwaukee Avenue who were well supplied with Springfield rifles and shotguns. They immediately converged on the bank in force and approaching the room with all of the armament in hand, unlocked the door and let the two men out, who according to Mrs. Gridley, were shaking in their boots at being confronted with the small army.

“After much discussion and review of their credentials and after phoning the bank examiner in Chicago, it was ascertained that the two gentlemen being held were actually bank examiners and that their real intention was to examine the “Lake County Bank” and instead had gone (unfortunately) to the wrong bank. Mrs. Gridley recalls that these two examiners received so much in the way of kidding and ribbing from the banks in the Chicago area that they finally asked for a transfer to New York.”

In 1934, the Libertyville Federal Savings and Loan (originally created under a state charter) applied for and received a National Charter and became a Federal association. Thus consolidating and economizing, the banking institutions of Libertyville survived the Great Depression to continue serving their community. 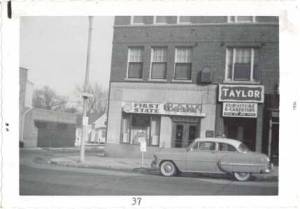 After World War II the banking businesses in Libertyville continued to thrive and another player entered the scene. The First State Bank opened in 1946 where the old First National Bank had been. They moved to 200 N. Milwaukee in 1965 or 1966, then changed names to Libertyville National Bank. They merged with First of America in 1988, but only stayed in business another four years when the banking industry again fell on hard times.

The First Lake County National Bank is still with us today, although it has undergone several location and name changes. In 1968 a new building was designed for the bank at 140 W. Cook Street. On December 24, 1979 a second building was dedicated at 1201 S. Milwaukee Ave. in Libertyville. Several name changes and acquisitions later they operate as Chase Bank in these locations.

Although the banking landscape has changed significantly in the 130+ years since Wright, Parkhurst & Co. opened its doors, Libertyville is still served by several financial institutions. Chase Bank operates out of the buildings on West Cook and South Milwaukee Avenue. The Libertyville Bank and Trust has settled into the old stately bank building on North Milwaukee Avenue in downtown Libertyville and has a second location on South Milwaukee as well. Other banks currently open in LIbertyville include Associated Bank, Bank Financial, BNO Harris, and Fifth Third.

3 thoughts on “Banking on Libertyville”