I have a confession to make: Even though I was a history major in college and taught US History in high school for ten years, I didn’t know much about Alexander Hamilton except that he did something with banking and has his picture on the ten dollar bill. Oh, and that he had been killed in a duel with Aaron Burr.  When I read that Lin-Manuel Miranda had picked up a copy of Ron Chernow’s biography Hamilton in an airport bookstore and immediately saw its potential as a hip-hop rap musical, I knew I had to read it. Actually,  I listened to it and loved it. However, I realize that it’s a BIG book and recognize that most people aren’t as much of a history geek as me, so I am going to recommend things anyone might want to read, watch or listen to in order to learn more about this influential man whose story was lost in the mists of time until revitalized by Lin-Manuel Miranda. Also, if you got lucky enough to get tickets to see this Grammy and Tony-winning musical, you might want to learn a bit about Hamilton the man before going. If you click on an item’s title, you will be taken to Cook Library’s catalog where you can put it on hold.

Hamilton : the revolution : being the complete libretto of the Broadway musical, with a true account of its creation, and concise remarks on hip-hop, the power of stories, and the new America / by Lin-Manuel Miranda and Jeremy McCarter

Includes libretto and photographs from the musical, as well as an account of the creation of the musical, from the composition of the first song of the show in 2009 to the opening night in 2015.

by Elizabeth Cobbs: Set against the dramatic backdrop of the American Revolution, and featuring a cast of iconic characters such as George Washington, Thomas Jefferson, and the Marquis de Lafayette, The Hamilton Affair tells the sweeping, tumultuous, true love story of Alexander Hamilton and Elizabeth Schuyler, from tremulous beginning to bittersweet ending his at a dueling ground on the shores of the Hudson River, hers more than half a century later after a brave, successful life. 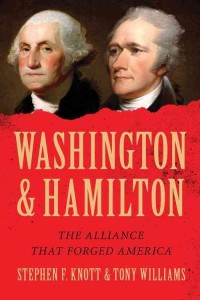 Washington and Hamilton : the alliance that forged America / Stephen F. Knott and Tony Williams; 2013 (nonfiction): “I heard bullets whistle”: young George Washington — “I wish there was a war”: young Alexander Hamilton — “We must assert our rights”: the growth of revolutionary ideology — Revolutionary band of brothers — A continental republic — Two roads to Philadelphia — Winning ratification — The indispensable president — A time of “folly and madness” — “Enough to melt a monument of marble” — Postscript: the indispensable alliance. 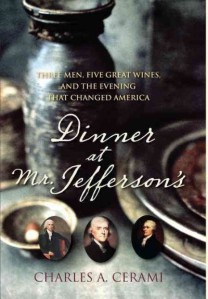 Dinner at Mr. Jefferson’s : three men, five great wines, and the evening that changed America  by Charles Cerami; 2008–Before the clash — An old friend’s bombshell — The mounting anger — The radical conservative — Aggressive lobbying — Thoughts of breaking up — Jefferson’s awakening — A country without a capital — Doubters and believers — Nearing a decision on the capital — That day on the street — Dinner at Secretary Jefferson’s — The Philadelphia story — Doubts settled, doubts revived — Hamilton the unstoppable? — Before the fall — From brilliance to disaster — The disappearing cabinet — One heart and one mind — The Jefferson factor — Recipes from Monticello’s kitchen — Alexander Hamilton’s letter to new coast guard officials.

Duel with the devil : the true story of how Alexander Hamilton and Aaron Burr teamed up to take 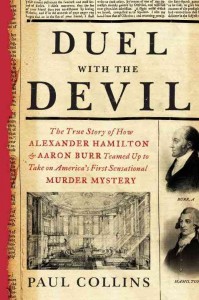 on America’s first sensational murder mystery  by Paul Collins (nonfiction): “Documents the sensational 1799 murder mystery that inspired rivals Alexander Hamilton and Aaron Burr to join forces, revealing the links between the accused killer and both men and the public outcry that nearly prevented the suspect’s fair trial.

War of Two : Alexander Hamilton, Aaron Burr, and the duel that stunned the nation (nonfiction) by John Sedgwick (nonfiction); 2015

with Middlemarch Films ; WGBH/Boston; 2007–One of the most controversial men of his age, Alexander Hamilton was a gifted statesman brought down by the fatal flaws of stubbornness, extreme candor, and arrogance. His life and career were marked by power, scandal, and tragedy.

The Duel [videorecording (DVD)] / produced by Oregon Public Broadcasting and Red Hill Productions for American Experience ;2011–On the morning of July 11, 1804, Alexander Hamilton was fatally wounded in a duel by Aaron Burr in the culminating act of a political war that had lasted for more than a decade. The rivals’ final encounter in Weehauken ruined Burr’s career and changed the fate of a nation.

Hamilton [sound recording (CD)] : original Broadway cast recording / book, music and lyrics by Lin-Manuel Miranda–a MUST listen! Even a baby boomer like myself will find much to love about this great album! 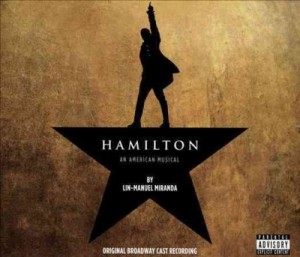 This is the way history should be taught! Great stories about the struggles and accomplishments of the fascinating people whose influence is still being felt today! It almost makes me want to be back in a classroom so I could share this all with students. Almost.