Cook Avenue, Cook Park, Cook Memorial Library, the Ansel B. Cook Home. Libertyville is full of things named Cook. Who is this Cook guy? Over the next few months (and several blog posts), we’ll take a look at Ansel B. Cook and learn more about the man, his work, and his legacy.

Ansel Brainerd Cook, circa 1876. Courtesy of the Libertyville-Mundelein Historical Society.

Ansel Brainerd Cook was born August 18, 1823 in Haddam, CT to Willard C. Cook (1799-1873) and Abigail Brainerd Cook (1804-1854). The Cook and Brainerd roots in America are deep. Willlard’s father, Nathaniel Cook, was a sergeant in the Revolutionary War and Abigail’s father, Captain Ansel Brainerd, served in the War of 1812. Ansel’s paternal lineage stretches back to the Mayflower. His maternal ancestry included the first governor of Connecticut.

Willard was in the quarry business with his father-in-law, Ansel Brainerd. Their quarry, which is now the Brainerd Quarry Preserve under the Middlesex Land Trust, provided stone for the building of Fort Hamilton in New York. [Historical side note: the government engineer in charge of construction of Fort Hamilton was Robert E. Lee.] Young Ansel attended Brainerd Academy and planned to go to university, but poor health (no specifics are known to us) precluded advanced studies. Instead he joined the family business and learned the stone cutter’s trade. According to Portrait and Biographical Album of Lake County, Illinois (1891): “This disappointment proved one of the blessings of his life, for the work which he took up when he found he could not continue his studies has made him not only well-to-do, but a prominent man as well.” Our series of posts will show this to be true.

In 1846, Willard learned of opportunites out west and visited Illinois, likely because his wife’s cousin, George Brainerd, was already living in Fremont Township. Willard liked what he saw and purchased two farms, over 80 acres, in Section 13 of Fremont Township, near current day Midlothian Road and Winchester Road. He returned to Connecticut to prepare the family for the move. 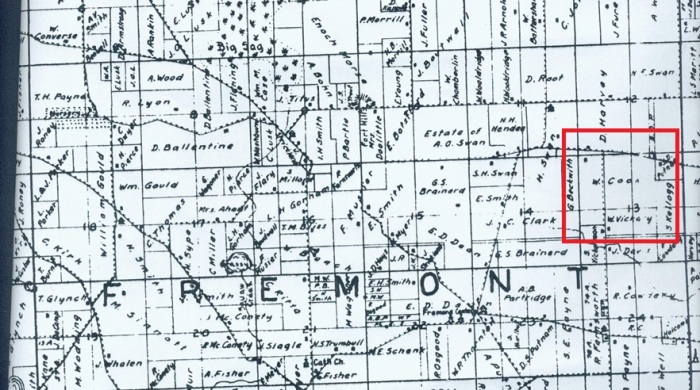 Willard, Abigail, Ansel (age 23) and siblings Abigail Florilla (age 19), Charles Willard (age 14), and Ellen S. (age 6), departed Connecticut on June 3, 1846. They travelled down the Connecticut River to New York and then by canal packet boat along the Hudson River and the Erie Canal. Reaching the Great Lakes, the Cooks transferred to the steamer Missouri headed for Little Fort (now Waukegan). It was a rough trip across the Great Lakes and several times the boat was in danger of foundering. [Historical side note: the Missouri did founder on its second voyage after the Cooks’ passage.] The group arrived in Little Fort on June 20, 1846 after a seventeen day voyage.

Willard and his family farmed their land for about eight years. During this time, Ansel moved to Waukegan and taught school at Central School. He also taught for three months in the Libertyville schoolhouse, which at that time was located sixteen feet south of the Lake County Bank building  (today’s Picnic Basket) and 10 feet from Milwaukee Avenue. 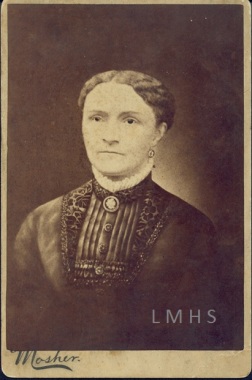 Helen Maria Foster Cook, circa 1876. Courtesy of the the Libertyville-Mundelein Historical Society.

In 1849, Ansel married Helen Maria Foster, daughter of Dr. Jesse Haven Foster, Libertyville’s first practicing physician. Dr. Foster was an early Libertyville settler and owned land stretching from Milwaukee Avenue to Butler Lake including what is now known as Cook Park. [Ansel would purchase the land from his father-in-law in 1870.]  Ansel and Helen had a daughter, Ida Elizabeth Cook, on December 20, 1850. Unfortunately, Ida passed September 15, 1851 at the age of 9 months and 15 days. One biography mentions another Cook child dying as an infant, but no evidence has been found to support it.

In 1853, Willard and Ansel secured the contract to lay the stone sidewalks around the Chicago courthouse to be constructed on the block bounded by LaSalle, Washington, Clark, and Randolph Streets. [Historical side note: Abraham Lincoln lay in state at this courthouse after his assassination. The building was destroyed in the Great Fire of 1871.] With this coup, the Cooks moved to Chicago where they operated a stone yard on the corner of Market and Quincy Streets, which today is home to the Willis Tower. Ansel’s home was at 380 W. Adams. Due to a street re-numbering in the early 1900s, this is further west than one might think. The house would have stood west of Racine Avenue in the vacinity of toady’s Whitney Young Magnet School.

In our next post, we’ll explore Ansel’s business and political success in Chicago. Stay tuned!