The list of famous (and infamous) Depression-era outlaws is a long one, from Ma Barker of the Barker-Karpis gang to Fred “Killer” Burke, about whom whole books could, and in many cases have, been written about. Today however, I’d like to tell the story of some lesser-known, but just as brazen, criminals who between 1930 and 1932 robbed the State Bank of Mundelein no less than three times, with a poor cashier named Milan C. Mott and his family finding themselves caught in the middle each time! 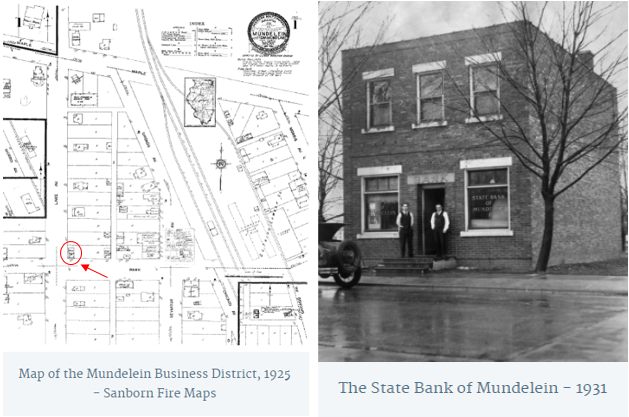 The first of these daring robberies occurred at 6:45 pm on Thursday December 1930, when five unmasked robbers armed with revolvers, sawed-off shotguns, and a nasty looking machine gun entered the State Bank of Mundelein. Located on Lake St. on the edge of the village’s business district. The State Bank had been established in 1916, and although it managed to keep its doors open during the Depression, little actual business was done there. Leveling their guns at the three employees, including Mott, and the one customer who had the misfortune of being at the bank, the robbers proceeded to lock the employees and customer in the vault before forcing S.E. Worthen, the teller on duty at the time, to open the safe. 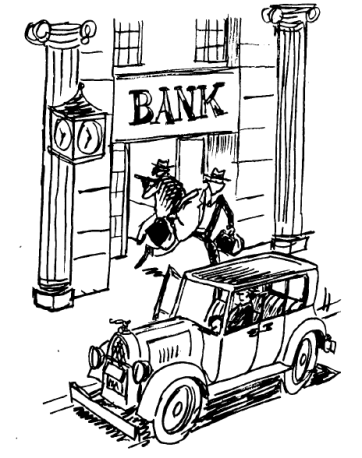 As the robbers emptied the safe, a man named John L. Jarrett drove up to the bank, only to be accosted by one of the gang who had stayed outside to keep watch. The robber attempted to force Jarrett into their getaway car, but Jarrett was able to escape and, running down the street, was able to notify Chief of Police Clayton Tiffany about the robbery. The warning came too late however, and by the time the police arrived at the scene the robbers were fleeing south with more some $3,500 in loot. 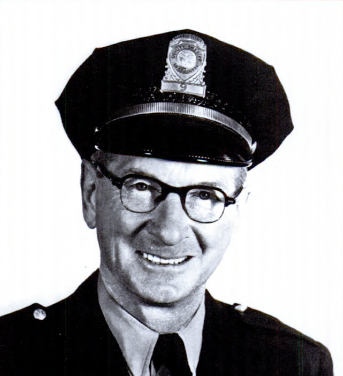 Two months later, a Chicagoan named Frank Dzan was arrested by C.S. Saunders of the Illinois State Bank Association and Lawrence J. Benson, chief of Detectives of the St. Paul Railroad, on suspicion of being one of the robbers. Although questioned about the Mundelein robbery, as well as one that had taken place on February 18th where robbers had made off with $5,000 from the Bristol State Bank, on March 26th Dzan was cleared of involvement in the Mundelein robbery and released to his parole officer. The trail once again cold, the police could do nothing but follow up leads and hope for an arrest.

Now, one would think being the victim of a bank robbery would be a once-in-a-lifetime event, but this is where Mr. Mott’s story starts to become a tragedy of the absurd. 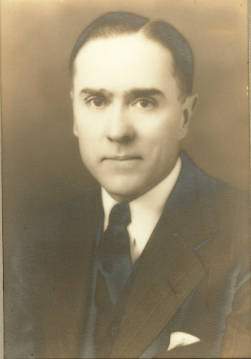 At 8:30 pm on Thursday night April 9th, 1931, Mr. Mott’s oldest son Paul answered the door to their home, only to find himself face-to-face with the same gang who had robbed the bank, this time pointing a gun at his head. Forcing their way inside, the gang, this time numbering only four, cut the phone line and held the entire Mott family hostage for the remainder of the night. Seemingly at ease, the robbers spent the time listening to the radio, discussing the Tribune Golden Gloves Bout (John Long would win the heavy weight title for that year), raiding the icebox, and one even taking a bath. While the robbers seemed almost friendly at times, the machine guns they left on the hallway table conveyed all the threat they needed. At midnight, William, the youngest of Mott’s two sons, arrived home after having spent the night with a friend.  Upon entering the house, he found himself likewise held captive.

At 5:30 am the robbers bound and gagged the family, leaving two behind to stand guard while the other two took Mott to the bank.  I can imagine their disappointment to learn that the vault was on a time lock, and would not open until 7 am. To pass the time they forced Mott to give them the bank’s cash book, taking $10,000 in $1’s, $5’s, $10’s, and $20’s. Once the vault opened and the robbers had taken what they wanted, they bound and gagged Mott and left him in the bank’s basement. Mott was able to eventually loosen his gag so that when his coworker Leo Dorfler, who had been with him during the first robbery, arrived at work Mott was able to call out for help. When the police arrived however, once again there was no trace of the gang.

The third and last robbery began on Thursday January 21st, 1932. The Mott family had been entertaining the night before, and in the middle of the night Mr. Mott was woken by a disturbance at his front door. Upon investigating he found the four bandits, masked and armed with sawed-off shotguns and a rifle, standing in his house. One can imagine the leader of the gang smiling as he saw Mr. Mott, telling him “We’re back again. Everyone is going for a little ride with us”.

With one of the gang left to guard Mrs. Mott and her sister Mrs. Florence Taylor, along with the Mott’s two sons, Mr. Mott was forced into the gang’s car and back once again to the bank. Seemingly having forgotten that the vault was on a time lock, the robbers ordered Mott to open the vault. Angered by his insistence that he couldn’t, they took him behind the bank and threatened to kill him. However, rather than carrying out their threat they instead returned to the Mott’s house and brought the rest of the family back to the bank. Waiting until 8:20 a.m. for the vault to open, the robbers found themselves unexpectedly taking another hostage when E.S. Worthen, a teller, arrived for work. Taking $2,700 in loot, the robbers fled. However, this time they decided to take a hostage: Paul Mott.

As they forced the son into their car, a black Sedan with a license plate that had been reported stolen in Chicago a few days before, they threatened that Paul would be killed if the police were notified of the robbery before an hour is up, warning that they had “a radio in the car, and if we hear the robbery reported over it he will be shot.” Speeding through Mundelein and Wauconda at 80 miles per hour, which Paul would later testify he was “more afraid of…than of what they might do to me,” the gang was quickly lost to any potential pursuers. Forty-five minutes after the robbery, the police were notified. At this point two local residents, Clarence Clabaugh and Linden Burns, volunteered to try to track the getaway car using their private plane. However, by the time the search got underway Paul and been released by the gang and, having changed cars to avoid detection, the gang once again escaped.

The ramifications of this third brazen robbery were swift, with local police cooperating in their search efforts and the State Bank of Mundelein contracting O.B. McClintock Co. to install bullet-proof glass, steel partitions, a gong-based alarm that could be heard in town, and a time lock on the bank tied to a silent alarm to thwart any future robbery attempts.

The gang was finally caught, much to Mr. Mott’s relief I can imagine, during a police raid in Chicago and Waukegan in April of that year. The men arrested in Chicago at what appears to have been the gang’s hideout, were Frank Fafer and Ray Sloan, with Edward Kuzma later being arrested as an accomplice. At the same time in Waukegan, police arrested  Edward Bennett, Michael Yara, and Edward Hallgren. Loot from the Mundelein robberies along with robberies at banks in surrounding towns were also recovered at the Chicago site.

At court on April 14th, the jury indicted the men on robbery, kidnapping, and larceny charges with an additional man, Fred “Whitey” Fulbright, still on the run but with the Illinois State Attorney General A.V. Smith predicting that he would be captured soon. The gang were sentenced to one-to-ten years for larceny and one year-to-life for charges of robbery with a dangerous weapon. The final two on trial pleaded guilty on May 5th and were remanded to the Joliet penitentiary by Judge Ralph Dady. The last two on trial, Michael Yara and Edward Bennett changed their plea to not guilty however, after an agreement with A.V. Smith to not prosecute them on the kidnapping charge if they agreed to plead guilty to the two remaining charges. 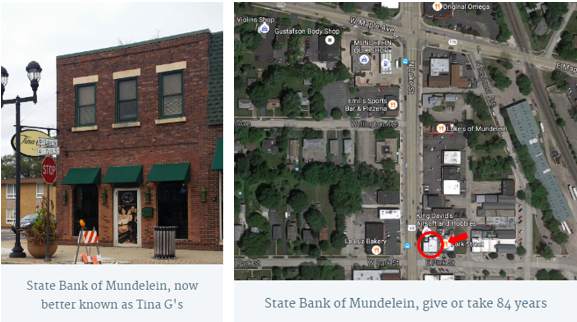 After the federal “bank holidays,” in 1937 which ushered in the  federal reserve system, the bank reopened as the First National Bank of Mundelein. Eventually, First National went the same way as the State Bank, and today, the building now houses Tina G’s, an upscale restaurant that uses the vault as its wine cellar. Police Chief Clayton Tiffany would remain at his post until his retirement in 1942. As for the Mott family, after the trials of the robberies and being taken hostage twice, Mr. Mott Milan suffered a nervous breakdown. Unfortunately things did not get better: less than a year after the robbers had been arrested and sent to prison, the family faced a further tragedy when their oldest son Paul drowned in 1933 after a swimming accident at Diamond Lake. Mr. and Mrs. Mott eventually moved to Waukegan, where they lived until Milan passed away on  Jan. 13, 1943. He was survived by his wife and his two surviving sons Harry and William.

“Arrest Man Though Tot Be One of the 5 Robbers State Bank of Mundelein.” Independent Register (Libertyville), February 26, 1931.

Images of the Mott family courtesy of Wayne

3 thoughts on “Three Robberies and a Clerk: The story of the daring depression-era robberies of the State Bank of Mundelein”