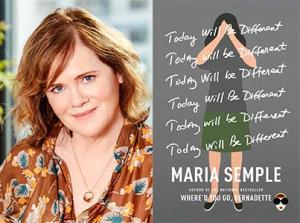 Eleanor Flood is a crackpot. Well, she’s not, really, but that’s what I thought when I started reading this brilliant, funny story of a day in this character’s life. In a direct, quirky, first-person narrative, Eleanor tells us that she’s not happy with her life. “Today will be different” is her mantra.  Everything seems great on the surface: she’s the wife of an enormously successful hand surgeon, she has a precocious eight-year-old son, and she doesn’t want for anything. But on this particular day, her son leaves school sick, an old acquaintance reappears in Eleanor’s life, and she discovers her husband has been keeping a secret from her. Suddenly her life is unraveling, and Eleanor decides, in hilarious fashion, to take action. I won’t say anything more — you’ll have to read the book to find out what happens.

I loved Eleanor’s voice. It just crackles with cynicism, self-deprecation, and dark humor. Her character is delightfully unpredictable, and it was so much fun just to see what she would do or say next. Even the darker aspects of her life are completely unexpected. All of Semple’s characters are a little over-the-top, in the best way, and the situations they create are both hilarious and touching. The book also contains poems and graphic illustrations, which only add to its charm. The only thing I didn’t like about this book was its ending — it wrapped up a little too neatly — but that’s a minor thing. If you liked Semple’s first book, Where’d You Go, Bernadette, you’ll like this one too. And if you haven’t read Maria Semple yet, this is a great place to start. It’s a book you won’t want to put down.