Twice a year the Libertyville-Mundelein Historical Society publishes a newsletter for its members featuring society news, upcoming programs, and Libertyville history tidbits. The Fall 2016 issue featured an article about the 100th anniversary of the Liberty Barbershop, a Milwaukee Avenue institution, written by Historical Society member Barb Thill. Unfortunately, due to space limitations, Barb’s article had to be shortened from her original. We thought the full article needed a venue, so we are presenting it here. 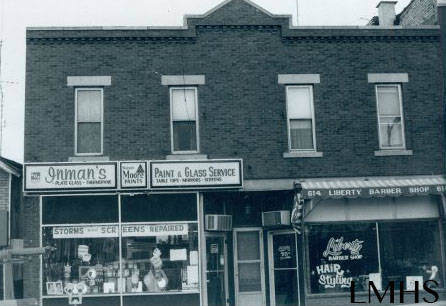 A Barbershop Story – by Barb Thill

Despite the directions from barber Tim Vojtech as well as his mom, 5-year-old Jackson continued to squirm as the falling snippets of his hair tickled his neck. Finally, Cully Vojtech stepped over to hold Jackson’s head still while his brother Tim used a stencil to shave an LHS pawprint on the back of the little boy’s head.

This personal treatment isn’t unusual for the Liberty Barber Shop. Owned since 1950 by the Vojtech family, the shop serves customers of all ages and from Lake County and beyond. On a warm afternoon in June, the five barbers cut the hair of toddlers, teenagers and adults. As soon as a cut was finished and the hair brushed from the neck, another person quickly sat down in the chair. Waiting customers filled the two benches along the north wall with many of them chatting easily with each other despite the fact that they had never before met until they sat had down next to each other. 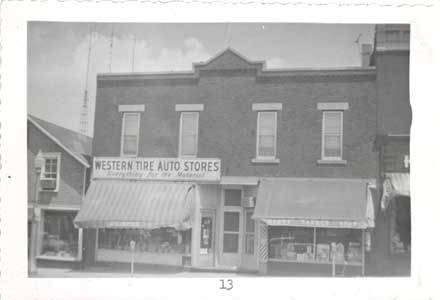 Many of these customers have loyally patronized the Liberty barbers for years and, in some cases, decades. Among the most loyal of customers, Cully said, are members of police and fire departments. The cops come from Libertyville, Chicago, Antioch, Zion, and even Elkhorn, Wis. These customers are “the best,” Cully said, explaining that they do so much for their communities.

Fragments of the Liberty Barber Shop’s past remain. Pale blue and white tiles peek from behind the wood paneling, and at the corners of ceiling, the original pressed tin ceiling with its rounded corners can be seen. Six years ago when the shop underwent some remodeling, the Vojtechs discovered a treasure of sorts when the floor was taken down to the original hardwood. They uncovered a circular tile emblem reminiscent of a compass located in front of the door. 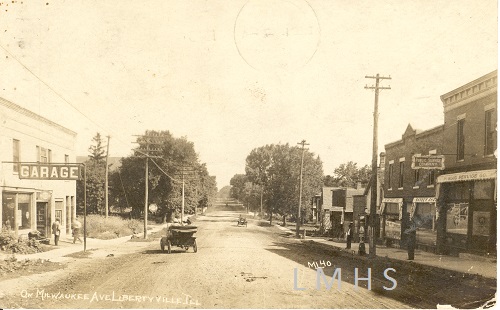 A barbershop has operated at 614 N. Milwaukee Avenue since 1916. The shop was owned by Fred Smith starting about 1919 following his discharge from the army after World War I. Smith operated the shop until 1941 when he went to the Great Lakes Naval Training Station to barber.

Unique for more than its century-long location, the Liberty Barber Shop is also known for its decor. Posters and photos blanket the walls and ceiling, many of them featuring the green and gold of the Green Bay Packers. Others relate to hunting and fishing, and a concrete Bucky Badger rests on one of the benches. The Vojtechs are Wisconsin residents; long ago, one of them decided it would be fun to tease the locals with pictures of their favorite team. And, in front of one of the mirrors, a display of police patches indicates the distances officers travel to get their hair cut.

Long-time customers know they can count on the eclectic decor just as they know they can count on a great hair cut at a more-than-fair price. For at least 15 years, hair cuts at the Liberty Barber Shop have cost only $10. Most customers, Cully said, pay more than $10. He’s even received a note from a customer asking him to please raise the price by $2. The Vojtechs have no plans to raise that price because they are as loyal to their customers as their customers are to them. Cully referred to those customers as “great characters” and “high quality” people.

And the customers? “I’ve loved every cut I’ve gotten” at the Liberty Barber Shop said a regular.