In 1880, Caleb Wright established a mercantile business, Wright & Sons, at the corner of First and Orchard (today’s Church St.) with his sons, George A. and C. Frank Wright. The firm was conveniently located next to the brand new Chicago, Milwaukee, & St. Paul railroad line which had just opened for passenger and freight traffic May 31 of that same year. Caleb Wright had donated land for the end of the tracks (see Here Comes the Railroad).  Wright & Son, later Wright Bros., operated a grain elevator, grain buying, and shipping business. In addition to lumber, coal, flour, mill-stuffs, feed, lime, hardware, farm wagons and machinery, cement and builder’s materials could be also be purchased from the firm.

In early 1903, the Wright brothers firm was purchased by the Emmons-Mercer Lumber Co. The deal included the real estate and buildings, excepting the store building which the Wrights promised to move. The shop was no longer needed as the new concern intended to focus on lumber, coal, and feed, and discontinue hardware and other goods. The hardware stock was sold to hardware store proprietor H.B. Eger. According to the Lake County Independent (Sept. 25, 1903), Emmons-Mercer Lumber Co. had one of the “finest lumber sheds in all the State…and is a credit to any city. This shed is 70 x 200 in extent and is of sufficient capacity to store 1,000,000 feet of lumber.” A unique feature of the shed was a “special side track running through the center of this shed, [where] cars of lumber are unloaded inside” to protect the stock from the weather. The office featured “hardwood fixtures, long distance telephone connections and electric light.”

After the death of Mr. Mercer and the retirement of Mr. Emmons, the name was changed to Libertyville Lumber Co. in 1909. 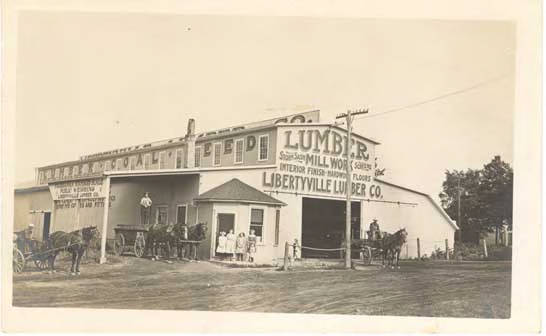 Circa 1910. Courtesy of  Libertyville-Mundelein Historical Society. 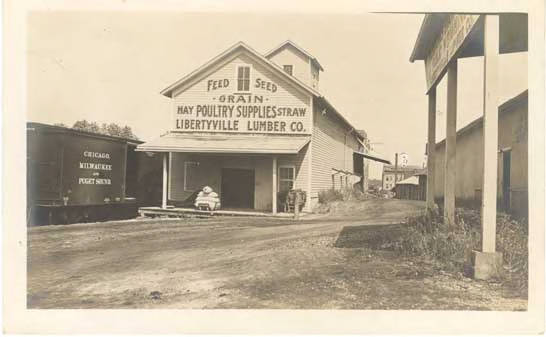 Circa 1910. Courtesy of Libertyville-Mundelein Historical Society. 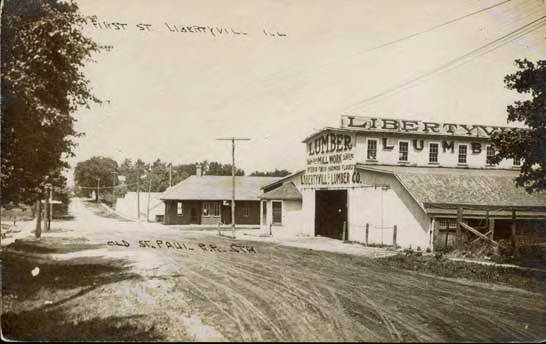 Edwin A. Bishop served as manager from 1903 until 1925 when he was replaced by O.A. Newsom who, as a young assistant manager in 1921, had coined the phrase “Libertyville Lumber Company – Down by the Old Depot – Been there 20 Years”. The slogan was updated as the number of years in business grew and can be seen on an apron currenty on display in the lower level of the Cook Memorial Public Library.

Over the years the products and delivery methods changed with the times. In the early days, horses and wagons were used for deliveries and were limited to within the village limits. The introduction of fork lifts made work a bit easier for yard employees who previously loaded and unloaded lumber by hand.

The lumber yard also served as a community gathering place. Visitors would stop by to see the railroad track that came in to the building and the “Chicago” street brick that covered the floor while young boys would build forts in the piles of shingles out in the yard.

In late 2001, Cambridge Homes secured a contract to purchase the Libertyville Lumber Co. property. After a few revisions to the initial plan, the Village approved construction of a three-story, 57-unit building. When construction of the brick building was completed in 2004, it heralded a new era for the block that had been the home to a lumber company for nearly 120 years.