Now that school has officially started and fall is upon us, I’ve promptly started counting down to Thanksgiving break (83 days, in case you were wondering). Beyond pumpkin spice lattes there are a lot of other great things to look forward to this fall.  There are several top-notch teen fantasy and science fiction sequels coming out this fall. Teen fantasy and science fiction sequels are not exactly a rarity, but the number and quality for this fall is definitely something to get excited about and start a countdown. These are the ones I’m most excited about:

Gemina by Amie Kaufman and Jay Kristoff is the second book in the Illuminae series. This 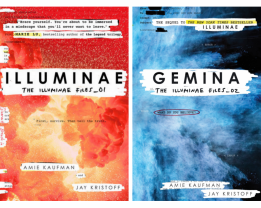 one is the only science fiction title of the bunch. On a planet far way, one corporation has had an illegal mining colony for quite some time. Their rival BeiTech finds out about this colony and decides to blow up the colony. Illuminae tells the story of two teens who escape the illegal mining colony. The thing that Illuminae, and now Gemina, special is that the story is told entirely in documents. There are ship schematics, chats, journal entries, military reports and more. Even though these books clock in at 500+ plus pages, they are fast reads due to their document format. Gemina will be released October 18th (46 days).

Crooked Kingdom is the follow-up to Leigh Bardugo’s Six of Crows. Six misfits with varying motivations take on the heist of a lifetime in a fabulous fantasy world – sort of like The Breakfast Club meets Ocean’s Eleven.  Crooked Kingdom will be released on September 27th (25 days!). 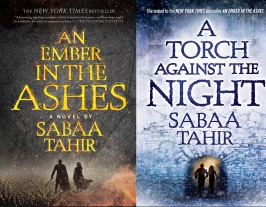 by Sabaa Tahir. An Ember in the Ashes is a Roman-inspired fantasy mixing the story of a soldier and a slave with magic, action, and a twinge of romance. A Torch Against the Night came out this week – the wait is over!

The nice thing about each of these titles is that they are true sequels, not like the 8th book in a series. If any of them sound like your particular cup of fantasy tea, then you only have one book to read to get caught up. Put your name on the hold list for the first book, or the new one and start your fall teen fantasy countdown today!