In 1775, the Revolutionary War began, pitting the American colonies against the most powerful military force in the world. In the early 1840s, the first wagon trains began their long trek across the Great Plains. And in 1976, wagon trains set about on a return journey east…wait, what? As the Fourth of July nears, we’ll be looking back at the not-so-long ago wagon trains that traversed the country during America’s Bicentennial celebrations.

Planning for the Bicentennial celebrations began in 1966 when Congress created the American Revolution Bicentennial Commission (later dissolved and replaced by the American Revolution Bicentennial Administration) to study proposals on how to best commemorate the 200th Anniversary of Americas’ founding. The final celebrations encompassed a variety of memorials and events, one of which was a series of wagon trains, going state by state from West to East on a pilgrimage to, as the planners of the wagon train described it, the “symbolic birthplace of our Nation –Valley Forge.” 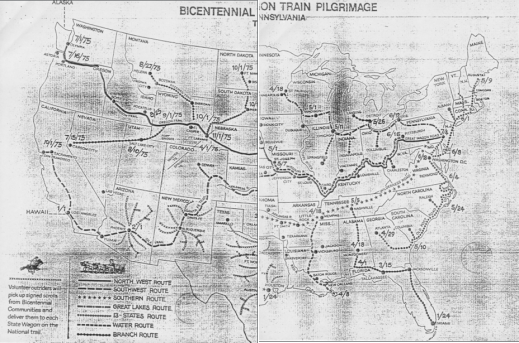 So, as evening rolled in on May 4th, 1976, a train comprised of 40 covered wagons traveling at a blistering 3 miles an hour set arrived at the Lake County fairgrounds in Grayslake, kicking off a four-day Lake County Bicentennial Community Fair. One can imagine people from Libertyville touring the 100 crafts exhibits, talking Revolutionary War politics with representatives of the 2nd Virginia Regiment of the Continental Line Military Re-enactment Group, and signing the scrolls rededicating themselves to the principles upon which the United States were founded upon.

Photos with permission of the Libertyville-Mundelein Historical Society

However, by 10:00 the next morning it was time for the wagon train to move on. So with the sounds of morning traffic murmuring in the background, the train made its’ way down the main street of Libertyville, accompanied by the “clip-clop of the horses’ hooves” and the cheers of onlookers, the wagon train as it headed out to its’ next destination. The wagon train would eventually join up with other wagon trains, all meeting at Valley Forge on the 4th of July, 1976 where President Gerald R. Ford gave a speech proclaiming that “our American adventure has just begun.”

That was 40 years ago, and although the journey has changed us, as all good journeys do, the principle that make us American are still there as strong as ever. The American tricentennial won’t be for another 60 years, so you may be a while before another wagon train rolls down Libertyville’s main street. But not to worry, because today is a day for burgers, chips, fireworks and fun! Happy (early) 4th of July everyone!”

Photos with permission of the Libertyville-Mundelein Historical Society