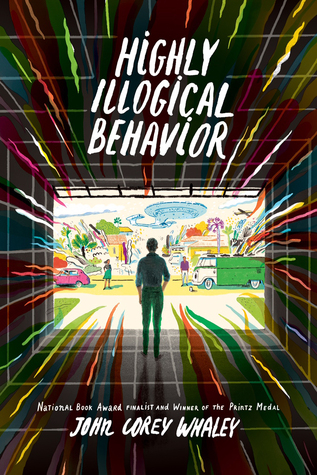 Solomon loves Star Trek, strategy games, internet videos, and other typically geeky indulgences. He typically gets along with his parents with their joke-filled relationship. Lisa is a little more uptight and a lot less geek. She doesn’t speak Star Trek or get along with her parents. Solomon has not left his house in three years, and has no plans to change that. Lisa finds Solomon and wants to fix him.  Lisa and Solomon quickly become friends spending time together every day, leaving Lisa’s other friends abandoned.

As much as Lisa wants to fix Solomon, it is hard not to ask yourself which of them actually needs fixing. The tone of Highly Illogical Behavior manages to stay funny, while delving into deep issues. Whaley provides an insightful and empathetic look at anxiety disorders. Alternating between Lisa and Solomon’s perspective throughout the novel allows for characters to have depth.  The realistic portrayal of anxiety, humor, and theme of friendship make Highly Illogical Behavior a great choice for every reader. And if all of the above isn’t enough to sell you on this one, the author, John Corey Whaley, also has quite the pedigree. Highly Illogical Behavior is his third novel. Whaley’s first novel Where Things Come Back won the Printz award, and his second, Noggin was a National book award finalist.

Seriously, you don’t want to miss this book. Pick it up today!