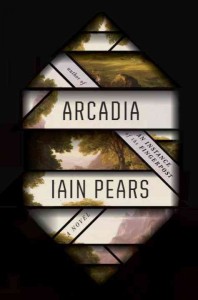 If you like time travel, science fiction, mystery and fantasy—-I’ve got just the book for you! Aracadia by Iain Pears is the ultimate mash-up of these genres, plus the author has created an app in which readers can select the ending that they’d prefer rather than the one the author chose.

This genre-blending page-turner tells the story of Henry Lytten, an Oxford professor, writer and retired spy, who’s living in the 1960s and whose close friends include Tolkien and C. S. Lewis. Lytten is writing a book set in a perfect world he created called Anterworld, which he has designed with rules strong enough to withstand the foolishness and destructive impulses of the people he will put in it.

Although  Professor Lytten’s book is still a work-in-progress back in the 1960s, hundreds of years in the future, Angela Meerson, a brilliant yet troubled psychomathematician lives in a dystopian future world and has created a real Anterworld. It is a bucolic medieval-type  world (without plagues, wars or famine) in which revered Storytellers rule fairly and honestly over the people and they all look to The Story for answers to any questions or disputes which might arise. This world also becomes a safe haven for Meerson when she needs a place to escape from her evil bosses who want to use her creation to make big bucks.

Meanwhile, back in the 1960s a lonely young neighbor of Professor Lytten who feeds his cat, stumbles upon a rusty garden pergola in his basement, covered up by an old blackout curtain. Curiously, she lifts the curtain and discovers a bright, sunny new world into which she ventures and where she becomes revered royalty. 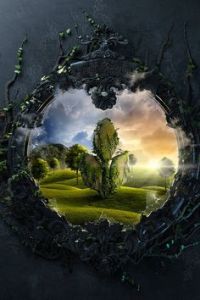 In the hands of a lesser author, the interweaving of these worlds and their characters might be confusing. However, Pears deftly guides his characters in and out of worlds and back and forth in time with strong stories and enough mystery that I felt compelled to keep turning the pages to see what would happen next.  His characters transform as they travel between worlds and take on new identities and even Meerson’s dismal future world can be changed by any character’s actions in the past. As Pears bends and breaks many of the ‘rules’ of traditional fiction, he explores the concept of free will and the power of words to generate change. 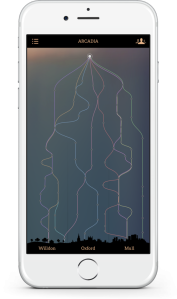 When you’re finished reading Arcadia, you can download its free app, also called Arcadia, and create the story and the ending you’d prefer. In light of JK Rowling’s recent apologies for killing off several of her well-loved characters, this sort of app might be just the thing for her and her readers to explore the various what-ifs left in our minds. Arcadia was a fun read, something that older teens would enjoy and is highly recommended.