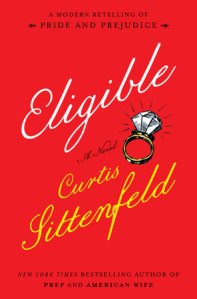 Jane Austen fans, rejoice! Here’s a modern adaptation of Pride and Prejudice that really works. It’s one in a series of Austen classics that have been re-written by best-selling authors: so far Val McDermid has written a 21st-century version of Northanger Abbey and Alexander McCall Smith took on Emma. But this book is the best of the bunch so far. Sittenfeld has stayed true to the original story with believable modern updates. Cincinnati is a good stand-in for Austen’s Hertfordshire; gentle Jane is now a yoga instructor; emotionally volatile Mrs. Bennet is a compulsive online shopper. The misunderstandings that take place between Darcy and Liz Bennet are no less real for taking place in a contemporary setting, and in fact are exacerbated by modern technology. Even though a couple of centuries have passed since the writing of the original book, human nature hasn’t really changed and the classic tale is still believable, if a little over-the-top at times.

Sittenfeld stayed true to Austen’s omniscient third-person narration and to her characters. Mr. Bennet still has the speech of a well-bred Englishman and somehow, it still works. Lydia and Kitty are as silly as ever, Mary remains dour, Jane stays unruffled, and feisty Liz remains fiercely proud and protective of her family. Sittenfeld’s take on Pride and Prejudice is fun, funny, and romantic — a perfect breezy read for a warm spring day.