Over the years our hometowns have hosted famous people and exciting events, but for attendance numbers and worldwide fame, nothing can match the 28th International Eucharistic Congress held at the St. Mary of the Lake Seminary in Mundelein, in 1926.

Eucharistic Congresses had been held by the Roman Catholic Church throughout the world since 1881 to celebrate Holy Communion and to encourage the people in their faith. The Congress that met in Mundelein was the first to be held in the United States, also marking the first time a papal representative, John Cardinal Bonzano, would visit this country.

Preparations began in 1924. Improvements were made throughout the grounds of St. Mary’s Seminary including the construction of five bridges over the lake for a spectacular procession which ended the Congress. The boat house and the stairs leading to the lakefront from the chapel were also constructed at this time. 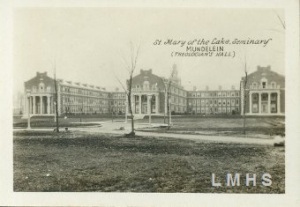 The Eucharistic Congress took place June 20-23, 1926 in Chicago with masses held at Soldier Field for three days. The Congress ended on Thursday, June 24 with the Eucharistic Procession at St. Mary’s in Mundelein.

One of the biggest challenges of this last day of the Congress was how to transport hundreds of thousands of people 40 miles from Chicago to the middle of Lake County. A special train decorated in cardinal red carried the cardinals and other “princes of the church” to Mundelein on Wednesday afternoon to stay the night in the seminary buildings. Cardinal DuBois, French delegate to the congress, stayed with Samuel Insull at his estate on Milwaukee Avenue.

On Thursday morning the pilgrimage began in earnest. The North Shore electric trains ran from Chicago to Mundelein beginning at 4 a.m., leaving every two minutes. Trains on other lines were also busy. (LI 17 June 1926 p. 3) Major roads leading out of Chicago had been closed the night before and were now opened as one-way streets, all heading north. At the end of the day, they headed south..

A huge canopied altar had been constructed on the steps of the Seminary chapel, with Cardinal Bonzano and eleven others seated on thrones flanking the altar. The festivities started at 10 a.m. as Cardinal Bonzano celebrated high mass wearing special vestments for the occasion. The service included a sermon by the archbishop of New York, Patrick Cardinal Hayes

The Eucharistic Procession, undoubtedly the high point of the Congress, closed the service. Following a three-mile path around the lake, the procession itself was two miles long. Cardinal Bonzano carried the Holy Sacrament accompanied by cardinals, archbishops and priests, All along the pathway throngs of people watched, prayed and sang in holy devotion.

Aerial view of the buildings, lake, and grounds of St. Mary of the Lake Seminary, from souvenir book

Sometime during the procession the weather, which had been warm and sunny, turned into a torrential downpour accompanied by thunder, lightning, and hail. According to news reports at the time, “the solemn procession faltered not” and those who watched continued their prayers and songs. Within 30 minutes the storm abated and the sun returned.

Officials estimated that around 500,000 people came to Mundelein that day. In comparison, the opening ceremony of the Beijing Olympics in 2008 was attended by 91,000. Today this event has all but faded from memory, but in 1926 the 28th International Eucharistic Congress was the center of the Catholic world.

2 thoughts on “The Day the World Came to Mundelein”