The Raven King comes out on April 26th as the last addition to Maggie Stiefvater’s beloved Raven Cycle series. If this sentence confounds you, then you probably haven’t indulged in any of the Raven Cycle books and now is a fabulous time to start. Since the final book will be released soon, if you start the series now, you won’t have to endure agonizing year-long waits in between indulgences in this delightful fantasy series.

The Raven Boys is the first book of the series and is a fabulous introduction to the gang of characters that make the Raven Cycle magic. Blue is the daughter of a psychic; she doesn’t have powers of her own like her mom and her “aunties” whom she lives with, but she does magnify energy around her. For her whole life she’s known that she will kiss her true love and he will die. So she’s decided not to kiss anyone. Blue also hates the Raven boys, boys attending the elite Aglionby prep school in her town. Gansey is a rich prep school boy who has devoted his life to finding the ley line and has convinced his friends of its existence. But Blue’s path inevitably crosses with all the Raven boys—Gansey, Adam, Ronan, and Noah—life changes forever. 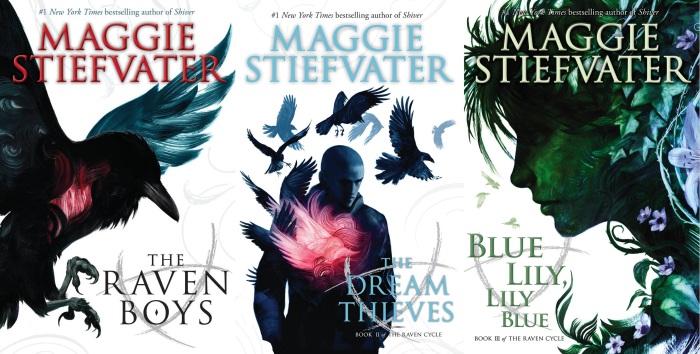 The Raven Cycle continues with the second book, Dream Thieves; the third, Blue Lily, Lily Blue; and the fourth and final book, The Raven King. The series has captivated readers with lovable characters and a fantastical world set within our own world (think Hogwarts with significantly more muggle interaction). The popularity of the Raven Cycle is due in part to its fandom appeal. Stiefvater has written a wide fantasy world with thousands of corners encountered but not peeked around, resulting in endless speculation and possibility. Check out the Raven Boys today!

And if you’re looking for even more Raven Cycle awesomeness, Maggie Stiefvater has put together a playlist for each of the books on her website. Check them out: Raven Boys, Dream Thieves, and Blue Lily, Lily Blue. There are lots of fun extras on her website, too!