Clara Averill Colby was born in Milwaukee in 1878 to Charles and Laura Averill. Unusual for her time, Clara attended the Columbia School of Music where she pursed a degree in public debate. After graduation, she continued to live with her parents and became a founding member of the Alpha Club, a group that was responsible for the creation of a lending library and which was known as a place for free-thinking women to discuss the issues of the day. In 1905, at age 27, Clara married Elhanan Wayne Colby, a prominent lawyer in and future mayor of Libertyville. The two had a son, John, in 1909. 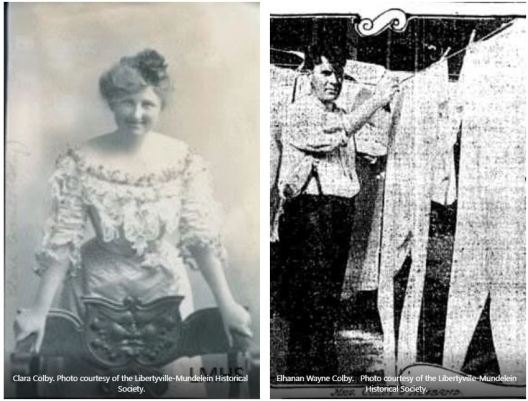 At the time, although women had more legal rights than before, ratification of the 19th amendment, giving women the right to vote, was almost a decade away. Still, suffragettes had made progress at the state level: In Illinois, after a fierce lobbying, including the early 20th century equivalent of spamming (see photo below), women gained a limited franchise on June 1913. 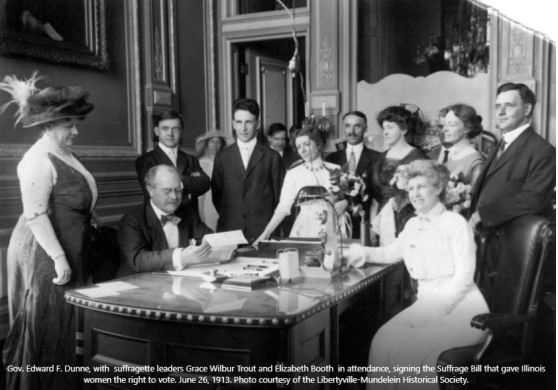 The next month, Libertyville was in the midst of a ballot on whether the Village should issue bonds to build a new village hall. At the time, local papers reported that “many of them [women] are already entering into their new privilege with keen interest…displaying a knowledge of politics which is surprising the men.” One of the few men who were not surprised that women had the same propensity for politics as their male counterparts was Clara’s husband, Elhanan.

Although normally his wife would have done the laundry that voting day, Elhanan took up the task, later saying that there was “no reason why he shouldn’t do laundry to help her exercise her right.” Thus freed, Clara walked the few blocks to the poll and became the first woman to legally vote in Illinois. Her status as the only woman to vote in Illinois was short-lived as she was quickly followed by 52 other women, all eager to take part in the sometimes messy democratic process. As Clara walked home she was so excited at having been the first woman to vote in Illinois that she reportedly stopped a female passer-by, telling her to “Do go and vote. I do not care whether you vote in favor…or against. Just go to the polls and show…that you are interested enough in the ballot to use it.” 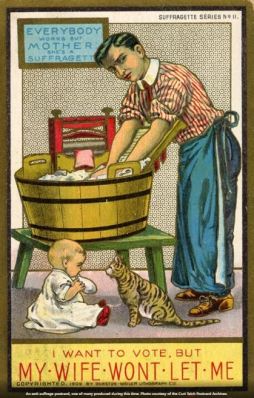 How the newspapers found out is not known, but they did. When Clara arrived home she discovered a couple of reporters waiting for her and her husband. After interviewing the couple, the reporters had them pose for photos, with her at the ballot and him at the clothesline. Mrs. Colby and her husband eventually moved to California, where she died at age 84 in 1962. She was buried next to her husband at the Libertyville Lakeside Cemetery. She was survived by her son, John Colby, as well as her four grandchildren and two great-grandchildren.