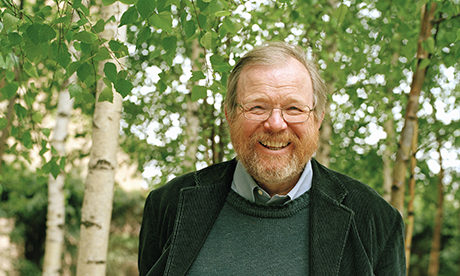 Bill Bryson first came to England as a backpacker at the age of 20 fresh out of the cornfields of Iowa. He found it was a country that was “wholly strange to me yet somehow marvelous. It is a feeling that has never left me.’’ Since then, the boy from the Midwest married an English girl, raised a family and just recently became an official citizen of the United Kingdom, giving him dual citizenship.

Twenty years ago, Bryson traveled around Britain and wrote about it in his esteemed book, Notes from a Small Island, which is one of the bestselling travel books ever written. Now in his 60s, Bryson decided to revisit his adopted country to see how it has changed, but this time trying to stop in different places. In The Road to Little Dribbling, he tells how he traveled by car, train, bus and foot through the UK’s towns and countryside, starting at the south at Bognor Regis and ending at Scotland’s desolate Cape Wrath in the north. As far as I can tell, there is no Little Dribbling, which is a pity because it is such a fetching name. 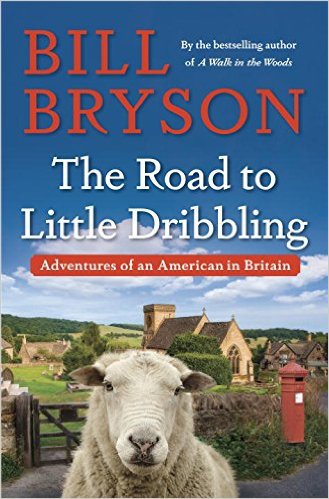 As always, Bryson makes hilarious and astute observations along the way about his discoveries and surroundings. Although he has great affection for both of his countries, he enjoys poking fun at them. He often notes how Great Britain is so different from the United States. When he finds himself walking on a path next to a field of cows, he relates how the English worry about being attacked by the seemingly docile farm animals. He notes that when a person is attacked by a cow in Great Britain, it’s national news, whereas when someone is murdered in the United States, it’s usually just local news.

He celebrates the beautiful natural areas that are abundant in the UK, while also lamenting the badly planned developments that destroyed green spaces and all the litter in the countryside Yet he also notes that “there isn’t a landscape in the world that is more artfully worked, more lovely to behold, more comfortable to be in, than the countryside of Great Britain. It is the world’s largest park, its most perfect accidental garden.”

Great Britain overflows with nuggets of obscure history, which Bryson is talented at excavating. As he points out, “Britain has 450,000 listed buildings, 20,000 scheduled ancient monuments, twenty-six World Heritage Sites, 1,624 registered parks and gardens (that is, gardens and parks of historic significance), 600,000 known archaeological sites (and more being found every day; more being lost, too), 3,500 historic cemeteries, 70,000 war memorials, 4,000 sites of special scientific interest, 18,500 medieval churches, and 2,500 museums containing 170 million objects.”  He also enjoys talking about British culture and how he has come to love it. He notes that “British really are the only people in the world who become genuinely enlivened when presented with a hot beverage and a small plain biscuit.”

Bryson likes to rant about stupidity, rudeness and incompetence, and admits he can’t be trusted alone in a McDonald’s anymore. He recalls an especially trying time at an airport in Texas where an airport employee didn’t know how to spell London or England.  Bryson, who is in his 60s, also crankily complains about the perils of growing older. He writes, “Somebody needs to explain to me why it is that the one thing your body can suddenly do well when you get old is grow hair in your nose and ears. It’s like God is playing a terrible, cruel joke on you, as if he is saying, ‘Well, Bill, the bad news is that from now on you are going to be barely continent, lose your faculties one by one, and have sex about once every lunar eclipse, but the good news is that you can braid your nostrils.’ ”

Bryson is perhaps best known for his book A Walk in the Woods, where he recalls his attempt to hike the entire Appalachian Trail from Georgia to Maine with an extremely out-of-shape friend. I recently read A Walk in the Woods, which was published in 1998, and it has stood the test of time. It was made into a motion picture last year with Robert Redford and Nick Nolte, which didn’t get great reviews. I didn’t see the movie, but I highly recommend the book, especially as an audiobook. It was my introduction to the entertaining author, who’s written 18 non-fiction books with his unique take on the world. I hope to read more of them, including One Summer:  America 1927, which accounts the events of that momentous time of Charles Lindbergh, Babe Ruth and Al Capone. I also am looking forward to reading At Home: A Short History of Private Life, where he explores the comforts of domesticity.

Filled with snarky and laugh-out-loud observations, The Road to Little Dribbling will be a hit with Bryson’s fans as well as people who are intrigued by Great Britain. Reading this engaging book makes me long to revisit England, explore the country roads and find my own Little Dribbling.