Who knew librarians are such fools for love when it comes to movies? In honor of Valentine’s Day, I asked staff to share their favorite romantic comedies and love stories, and the response was overwhelming. Whether it’s a film that makes us laugh out loud or a three-hankie weeper that we love to wallow in, it seems there is no shortage of films that make the hearts of library staffers skip a few beats.

Are you in the mood for romance? Check out the discussion of some of our favorite titles below, and pick up a few to take home to share with your Valentine this weekend. Use the links provided to check availability in our catalog. You can also stop by the Reference Desks at both Cook Park and Aspen Drive to pick up a handy brochure with these and lots of other recommended titles. Here’s to love—and Happy Valentine’s Day! 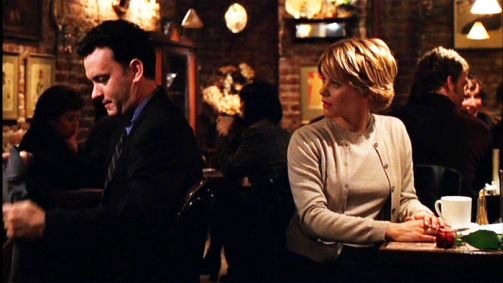 Jane: “I love The Shop Around the Corner with James Stewart and Margaret Sullivan. There have been several movies that copied that plot, but my hands-down favorite is You’ve Got Mail  — because of Nora Ephron’s wit, the chemistry between Meg Ryan and Tom Hanks, and because Meg’s character is obviously a children’s librarian at heart. I’m also very fond of The Holiday with Jude Law, Cameron Diaz, Kate Winslet and Jack Black. The two love stories are totally unrealistic, but also totally charming.”

Andrea: “This is my hands-down favorite movie category. The Way We Were is one of my favorites. I love Barbra Streisand’s feisty, independent character, and it’s Redford at his most gorgeous. It makes me cry every time. Before Sunrise is also fantastic. It captures young love so perfectly and realistically, and I’m a big fan of director Richard Linklater. I also really like the uncertain ending.” Also-rans: Out of Africa, Circle of Friends, Say Anything, Grosse Pointe Blank

Melissa: “A Very Long Engagement is a French film starring Audrey Tautou as a young woman searching for her fiance, who goes missing in France during WWII. Mathilde (Tautou’s character) connects with the families of the men last seen with her fiance, trying to piece together his last days in an effort to find her lost love. Also, Raising Arizona, in which an ex-con and a police officer fall in love, overcome the hurdles in their relationship, and build a life together. Their desire for children leads them to kidnap one of a newborn set of quintuplets (after all, ‘they had more than they could handle’). Hijinks and hilarity ensues.  This is the first comedy by the Coen Brothers.”

Sonia: “I like That Thing You Do, about a hometown band that makes it big. It’s clean, has a good story line, and even though you know who will get together by the end, it’s a fun ride to get there. Plus, you never get tired of hearing the band’s one-hit wonder, no matter how many times they play it.”

Heather B.: “I have an inordinate weakness for 10 Things I Hate About You. It’s a modern re-telling of The Taming of the Shrew that is both wry and witty, as well as silly and ridiculous. Plus, there’s a scene on the football field with the marching band. So over the top, so very silly, so cheesily romantic! Yes, please!” And Cyndi obviously agrees: “This is the classic 90’s teen movie. It’s funny, it’s a Shakespeare rendition…what else could you ask for?”

Becky K.: “My pick is Return to Me with Minnie Driver and David Duchovny. A young widower falls for a woman who shares an ‘unusual’ connection to his wife, who died in a tragic accident: the transplanted heart that saved Grace’s life came from Bob’s dead wife. This movie manages to be charming, laugh-out-loud funny, and poignant all at the same time. The entire film is perfectly cast. Jim Belushi and Bonnie Hunt (who also wrote the screenplay) are along for the ride and help keep the laughs coming.  An added bonus: it was filmed in Chicago.  Totally swoon-worthy in my book!”  Other faves:  Message in a Bottle and Murphy’s Romance

Molly: “Definitely The Family Man with Nicholas Cage and Tea Leoni.  This movie has such a great message of how wonderful family is and how important it is to be a good person.  What could be better than that?”

Brooke: “Moulin Rouge is my favorite (tragic) love story. The forbidden love between a penniless writer and a courtesan/aspiring actress is heartbreaking. Listening to Ewan McGregor belt out ‘My gift is my song…and this one’s for you’ always makes me smile. Watching Nicole Kidman and McGregor fall in love to a medley of famous love songs inside of a decorated elephant castle is a treat for the eyes, ears, and heart. I can watch this movie any time of the year and remember, ‘The greatest thing you’ll ever learn is just to love and be loved in return.'”

Maureen C.: “I love Pride and Prejudice with Kiera Knightley. Though I’ve seen it dozens of times (I own the DVD), I still make sure I have a box of Kleenex handy for the ending scene with Mr. and Mrs. Darcy!”

Ellen J.: “I have three: 1) Groundhog Day, in which cranky weatherman (Bill Murray) gets stuck reliving the same bleak day over and over and over until he figures out how to convince the girl of his dreams (Andie MacDowell) to love him back. Hilarious and thought-provoking; 2) As Good as It Gets, in which Jack Nicholson stars as a sarcastic misanthrope suffering from OCD whose life is going along as well as he expected, until he learns his regular waitress (Helen Hunt) is having troubles at home. His attempts to help her are entirely self-serving, at least at first. Hilarious and heart-warming; and  3) The Notebook, in which an elderly man reads from his old diary to his his wife who is suffering from Alzheimer’s disease, hoping to revive the memories of the lovely girl he’d loved so passionately for so long. A five-hankie tearjerker!”

Jenny B.: “When Harry Met Sally —the ultimate quotable love story:  ‘I will never want your wagon wheel coffee table.’ ‘I’m going to be forty. When? Someday!’ ‘The White Man’s Overbite.’  A love story for the ages!”

Jean: “My vote is for Moonstruck. I haven’t watched it in years, but it’s still one of my favorites. Moonstruck ticks off all my boxes for the perfect romantic comedy—a non-traditional love story and laughs galore—but it’s the quirky cast of characters that really sets the movie apart. The leading man is a one-handed baker who lost his hand in a tragic bread-slicing incident. Need I say more?”

We even got the guys on staff in on the action!

Terry J.: “Easy! Lovesick from 1982. It stars Dudley Moore, Elizabeth McGovern, John Huston, and Alec Guiness. A psychiatrist begins to fall for one of his clients (and vice versa).”

Nate: “Eternal Sunshine of the Spotless Mind is hands-down my all-time favorite movie about love. The idea of going through the literal process of erasing all memories of someone, only to realize what you seriously loved about them in the first place, is such a strangely true reflection on how fickle the heart can be. It is only through this mental procedure that Joel (Jim Carrey) realizes he truly loves the quirky Clementine (Kate Winslet) enough to commit, despite knowing they will inevitably drive each other crazy.”

Okay — so maybe Mark wasn’t quite so keen on sharing!

Mark: “I hate romantic comedies! However, I was able to sit through The Proposal, Life as We Know It, and Knocked Up. The Holiday wasn’t terrible either.”  I’ll put that down as high praise from a tough customer, but I think Mark gave away his inner softie with this next comment: “Does The Princess Bride count? One of my favorites of all time!” Yes, Mark, The Princess Bride counts. It definitely counts!

Phew! That is a lot of love! Any favorites of yours that we missed? Please share!