During the 1950s vacations by automobile were the hot trend. Motels, offering free parking right by the door of your room so that moving luggage in and out was easier, popped up across the country, dotting roadsides in rural areas and on the outskirts of cities. As traveling by automobile grew increasingly popular, motels became a common sight. In 1958 Libertyville got its own motel when Earl Young built the Hitch Inn Post. 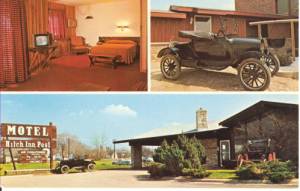 The Hitch Inn Post was a bit of a risk, located on the corner of Milwaukee Avenue and Buckley Road in the middle of what was then mostly farm land. Despite the location being on the outskirts of town, Young was banking on Libertyville’s factories and businesses, such as the Frank G. Hough Company, to provide a steady stream of customers for many years. Originally the motel had 16 rooms. Additions were built in 1963 and 1969. 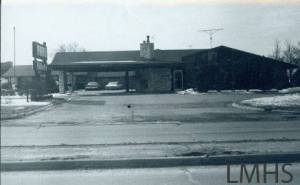 Thanks to its owner’s passion for automobiles, the Hitch Inn Post was a bit more than a run-of-the-mill roadside motel. To say Earl Young was a car aficionado would be putting it lightly. Young owned a collection of vintage vehicles, many of which were put on display at the Hitch Inn Post. Earl and his wife, Marjorie, loved to travel throughout the country by auto. On a European excursion, the couple boarded the Queen Elizabeth 2, taking with them a Model T that he had restored, and driving it around the continent. In 1973, things with the hotel were going very well, so Young built a restaurant with meeting and banquet space. Conferences were held there as well as weddings and other celebrations. The restaurant was named the Cabriolet, one of Earl’s favorite cars. Of course, the restaurant featured an antique car displayed prominently in the lobby.

In 1976 the Hitch Inn Post became part of the Best Western franchise. An expansion in 1981 brought the number of rooms to 144. A remodeling that made some of the rooms into apartments and suites reduced the room count to 127.

The Cabriolet Restaurant was not a huge money-maker so Young leased the building to a restaurateur and in 1997 it became Bellini’s Italian Restaurant and Steakhouse. Bellini’s did well but the building wasn’t handicapped-accessible and when the State of Illinois demanded the building meet the Americans with Disabilities Act regulations, Young was faced with spending more on renovations than the building was worth. The restaurant was torn down in 2003. Earl Young died in May 2005 and not long after  the Hitch Inn Post closed. Today the property where it stood is partially occupied by Wildberry Pancakes and Café. But longtime residents and many travelers remember the days when the Hitch Inn Post sat on the highly visible corner.