Geraldine Brooks is one of my favorite authors. She has taken me to the Middle Ages during the Bubonic Plague in A Year of Wonders  and to Harvard in 1666 to meet the first Native American graduate of that school in Caleb’s Crossing. She carried me across centuries and continents in The People of the Book and I learned what the Civil War was really like for the families left behind by soldiers in March. Brooks, a former foreign correspondent and award-winning author of fiction, has done it again. Although I wasn’t completely sure I cared that much about King David, who slew Goliath, I trusted that Brooks, who had thrilled me in a book about bubonic plague of all things, would tell such an amazing story that I had to read it. And what a story it was!

The Secret Chord, whose title comes from Leonard Cohen’s much-covered song Hallelujah, is the story of one of the most important men in the Bible  However, until I read this book, King  David had seemed more like a stick figure to me. Based on Brooks’ extensive research and her brilliant imagination, the reader follows David from his earliest days as an isolated shepherd boy, his brutal days as a soldier, his glorious days as a king who united all the warring tribes of Israel and Judah through his downfall via adultery with Bathsheba. David was a remarkable, yet very human, man who strove in every action to please his Lord, known to him as The Name. Seventy three of the 150 psalms in the Bible are attributed to David who was also reputed to be a gifted harpist and composer. David became for me a very real man who struggled and prevailed against some very real obstacles, both internal and external,  as he tried to act according to his God’s will. .

Once again, Geraldine Brooks has entertained me while teaching me about a key figure in history. I would highly recommend this book for anyone who enjoys a good story filled with passion, political intrigue, family dysfunction and the search for meaning.  It would also make an excellent book for a book group discussion.  This book will also make our current political climate seem quite sane and reasonable in contrast to the turbulent times of King David! 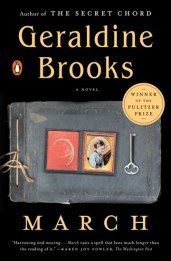