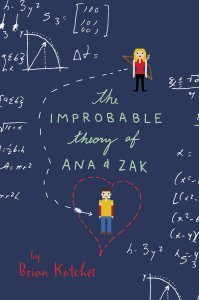 Type-A Ana can’t wait to lead her quiz bowl team to victory. Ana’s a rule follower, everything must be precise and by the book. Zak enjoys goofing off and role-playing games. When Zak’s shenanigans land him on the quiz bowl team as penance, Ana is livid. The quiz bowl semifinals force Zak to miss his annual sci-fi convention, WashingCon. When Ana’s little brother disappears from their hotel before the semifinals, she must enlist Zak to help her navigate WashingCon to find
her brother.

Ana and Zak’s friendship blooms in the most unexpected of ways throughout their crazy con adventures. Ana and Zak both begin to learn that each other’s life may not be the carefree life they thought it was. Ana follows so many rules so closely for a reason. Zak’s life is more complicated than it appears on the surface. This is a fun adventure-filled read with a dash of romance thrown in. In many ways, The Improbable Theory of Ana and Zak is Ferris Bueller’s day off meets a Sci-Fi Convention. This book will keep you engaged and laughing, while still holding deeper lessons and insight.