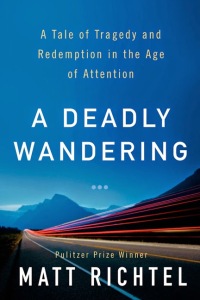 As personal technology has burst on the scene over the last 20 years, society has become ever more connected. Social media sites abound. Our phones are forever buzzing and dinging with items demanding our attention. Automakers tout the mini offices that our cars have become, allowing the driver to multitask during commutes. Societal expectation of always being available coupled with technology emerging at a rapid fire pace collide when our brains capacity to process information.

In A Deadly Wandering: A Mystery, a Landmark Investigation, and the Astonishing Science of Attention in the Digital Age, journalist Matt Richtel painstakingly researches the perfect storm that is created when we are behind the wheel and engaged with devices. This fascinating book about neuroscience, technology, and distraction features Reggie Shaw, a normal teen, who killed two rocket scientists when he was texting his girlfriend while driving. Richtel gives an even presentation of Shaw’s story leading up to the 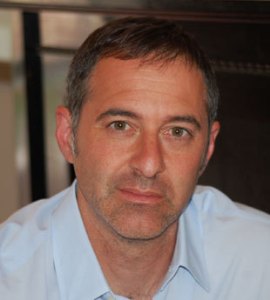 deadly accident and its devastating aftermath. Following the widows, as they grieve the loss of husbands and fathers, the victim’s advocate who championed their legal case, and the ensuing courtroom drama Richtel weaves personal narrative with cutting edge neuroscience. Exploring the work being done in premier neuroscience labs Richtel decodes the work of scientists nationwide and their discoveries of the effects of multitasking and distraction on the brain.
In the accident’s aftermath, Shaw becomes a fierce advocate for the dangers of texting and driving including persuading lawmakers to examine the issue of distracted driving in light of the mounting death toll. His story has been featured in a short documentary as part of AT&T’s #itcanwait campaign warning of the dangers of distracted driving. A Deadly Wandering will make you reexamine your relationship to your devices and other drivers on the road. A must read in our current tech obsessed times and an excellent book for discussion.
Haley Samuelson, hsamuelson@cooklib.org