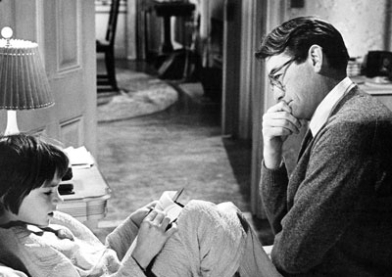 How does an author top a truly classic novel like To Kill a Mockingbird?  For over 50 years, it was believed that Mockingbird author Harper Lee never even tried.  The literary world was abuzz last February with the news that a second novel by Harper Lee had been found which featured many of the same characters made so famous in the Pulitzer Prize-winning Mockingbird.  Although Go Set a Watchman was actually written before the classic novel that we all know and love, the action takes place two decades after the events in the first book.  In Watchman, an adult Scout Finch returns to her home town of Maycomb, Alabama to visit her aging father, Atticus Finch.

The highly-anticipated Go Set a Watchman has been all over the news following its release this week as word has spread that the new novel offers surprising new insights into the character of Atticus Finch, the beloved fictional hero readers of the first novel have so long admired.  We won’t provide any spoilers here, but it’s interesting to wonder the extent to which deeply-held perceptions of the character have been influenced over the years by legendary actor Gregory Peck’s iconic portrayal of the character in the 1962 classic film adaptation of the novel.  Peck, who won a well-deserved Oscar for his performance, infused the character of Atticus Finch with his own blend of decency and honor.  Few actors are so closely identified with a character they portrayed.  For many of us, Gregory Peck is Atticus Finch, and vice versa.  Peck’s portrayal is so embedded in our movie-going conscience that it is no surprise that, in 2003, the American Film Institute voted Atticus Finch the greatest film hero of the past 100 years of American movie history.

Debate will no doubt continue to flourish over the newly-revealed personal attributes of Atticus Finch in the new novel.  Read Go Set a Watchman for the unexpected opportunities it provides to read more from a beloved author and spend time with characters we love.  Definitely reread the magnificent original novel — and make sure to take the time to revisit the iconic film as well.  Peck’s performance was — and will remain — masterful.