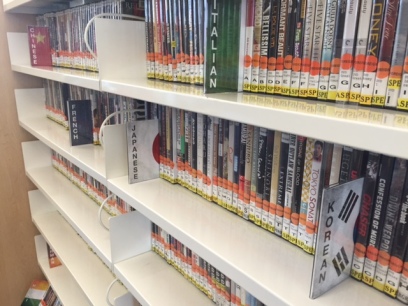 We’ve got great news for all foreign film fans!  In response to a request from patrons, we have re-organized our foreign film collections at both the Cook Park and Aspen Drive Libraries: they are now sorted by language, and then alphabetically by title within each language.  It should now be much easier to browse the collection and locate your favorites.   If you haven’t had a chance to check out our great collection of foreign films for a while, stop in soon and take a peek at our new look.  New titles are always being added to the collection, and we have lots of classics as well.  Looking for films in Arabic? Norwegian? Tamil?  We’ve got you covered!

We have other good news regarding foreign films as well:  all five of the films nominated for the Academy Award for Best Foreign Language Film in 2015 are now available for home viewing on DVD.  All five films were highly honored by film societies throughout the world in the past year, and each of the DVD’s provides English subtitles.  Use the links provided below to check our catalog for availability.

Anna, a young novitiate nun in 1960’s Poland, is on the verge of taking her final vows when she discovers a dark family secret dating back to the years of the Nazi occupation.  By the time this Polish-language film took home the 2015 Oscar for Best Foreign Language Film, it had already swept most of the major film prizes around the world — for good reason.  Ida is a truly moving drama, featuring outstanding performances from accomplished actress Agata Kulesza and newcomer Agata Trzebuchowska.  The film was photographed in stark black and white by director Pawel Pawlikowski, who also co-wrote the screenplay.

In this French-Mauritanian drama, the city of Timbuktu is under occupation of Islamists bearing the flag of ISIL.  Kidane is a cattle herder who lives outside of the city.  When one of his cows accidentally damages the net of a fisherman, the enraged fisherman kills the cow.  Kidane confronts the fisherman and accientally kills him.  The Islamists arrest Kidane and, per Sharia law, demand a blood money payment of 40 cattle to the fisherman’s family, which Kidnane cannot pay.  This film was another stand-out at a multitude of 2014 film festivals, including Cannes, where it was nominated for the prestigious Palme d’Or.

The Argentine film was another 2014 film festival darling, and was also nominated for the coveted Palme d’Or at the 2014 Cannes Film Festival, where its screening earned a standing ovation.  Written and directed by Damian Szifron, the darkly satiric film consists of six stand-alone stories of violence and revenge, as people cross the line into madness when faced with perceived injustice.

Another outstanding performer at international film festivals in 2014, this Russian-language film is set in Abkhazia during the 1990’s era war involving Georgians, Chechens and Estonians.  Although most of his fellow Estonians have fled his village to return to Estonia, the elderly Ivo has stayed behind to help harvest his friend’s crop of tangerines.  When wounded Chechen and Georgian soldiers, on opposite sides of the war, are left behind after a bloody battle near his home, Ivo is forced to take them in.

This film takes place in a small coastal town in Russia, where a man and his family are haunted by a corrupt local mayor determined to steal the family’s business, house, and land.  More trouble ensues when the man calls in an old friend, who is a high-powered lawyer, to help.  This darkly humorous film written and directed by Andrey Zvyagintsev, won the Golden Globe Award for Best Foreign Language Film in 2015 and was another Palme d’Or nominee at the 2014 Cannes Film Festival.