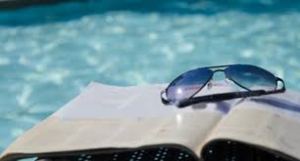 Well, I have two observations about reading now that I’ve retired.

I thought I would have many more opportunities to set aside reading time but I still have to squeeze my favorite pastime into small increments during my day.  I can only blame this dilemma on summer, grandchildren and the Blackhawks.  I’ve actually watched replays of most of their Stanley Cup games.

My second observation, though, is more positive.  Knowing that I don’t have to get up at the usual work day time, I have the luxury of reading a little longer before I fall asleep.

These are three of my favorite reads in June.

The Book of Unknown Americans by Cristina Henriquez

This is a novel about men and women who come to America from Latin and Central America for opportunities. They are following dreams yet desperately missing their homes while trying to make better lives.  In a Delaware community, immigrant families live on the same block, each with their own struggles in their efforts to become Americans.

Girl at War by Sara Novic

As many Americans, I’m mostly ignorant of the Serbian-Croatian war and I still don’t have a clear understanding. But it’s always more immediate and relevant to read a first person account — even though it’s a fictional account told by a 10-year-girl. I had to remind myself more than once that it was fiction and not a memoir. Beautiful writing, real characters and the realization by Ana as an adult that neither side is innocent in war.

The Fatal Flame by Lindsay Faye

This is the last novel in the Timothy Wilde trilogy about the start of the NYC police department in 1848.  It’s the early days in the women’s suffrage movement and awareness of the treatment and rights of women is a controversial issue. Faye weaves the issues of the times including political corruption into a gritty mystery. Timothy Wilde comes up against the worst elements of the city and he is a fictional character I will miss.

Next up is The Goldfinch by Donna Tartt, one of three books that I set as a goal for summer reading.  Hopefully, it will be on my list of July titles, the next time I contribute to Shelf Life – Read! Watch! Listen!