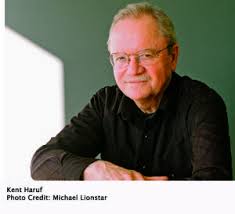 Although I have never visited Holt, Colorado, after reading Kent Haruf’s evocative Plainsong trilogy which was set in this small town, I feel as if I know the town and its people pretty well. I suspect that anyone who grew up in a small town anywhere in the U.S. would feel right at home with Haruf’s hard-working characters who struggle, love, make mistakes and sacrifices and still hope for the best.

The first book, Plainsong, introduces the reader to the McPheron brothers, aging bachelor farmers, who take in a pregnant teenager as a favor to her teacher when she’s kicked out of her own house. That the two men acknowledge what they don’t know and yet are willing to accept this challenge with grace and humor is a testament to Haruf’s genius at characterization. His are ordinary folks doing extraordinary things and finding their way as they do so.

The reader revisits the McPheron brothers in Eventide as they say goodbye to their now 20-year-old lodger and her toddler as she goes off to college. It was like greeting old friends for this reader. Yet Holt is no Mayberry. Death, abuse, danger and hard winters are part of the lives of those who live in Holt, and although Haruf doesn’t provide happily-ever-after, his characters come together as a community to help and console each other. These are real people, not sitcom characters.

In the third book of the trilogy, Benediction, we meet Dad Lewis, another resident of Holt and a hardware store owner who has just been diagnosed with terminal cancer. Unlike recent YA books about dying teens and their dramatic emotions, Dad Lewis quietly goes about living and taking care of his store and preparing his family for his death. It felt like a privilege to stay with this family as they faced the death of their beloved patriarch.

Kent Haruf died in November of 2014, but as he was dying he wrote one final book. A small gem of a book. Also set in Holt, Our Souls at Night tells the story of two older widowed neighbors, Addie and Louis, who, to their surprise, find comfort and companionship by spending nights together. As they fall asleep, they talk about their lives, spouses, children and grandchildren. Together they banish each other’s loneliness and when Louis’s young grandson comes for an extended visit, they find joy and challenges as they entertain him.

Kent Haruf writes quiet books about everyday people engaged in living, dying, loving and struggling. They face life’s challenges thoughtfully and with great love. Haruf’s characters feel as real to me as the folks I grew up with and I will miss them now that their chronicler has gone.