In October I delivered a presentation entitled “1914: Libertyville 100 Years Ago”.  At that program, an audience member asked me if the Libertyville One-Mile Track was in operation during the time. It was, but there were not many articles in the newspaper about the race track in 1914, so I had not included it in the year’s highlights.

Never one to let a local history question lie, I pulled the Cook Memorial Library Local History Clippings File folder on the One-Mile Track to verify the dates of operation. The track opened in 1904 as a harness racing venue. A few automobile races were held there in its later years.  Samuel Insull bought the track in 1918 and closed it – reportedly due to his objections to gambling. The heart of the track was located at the intersection of today’s Crane, Carter, and Rockland roads.1

I doubled checked the Lake County Independent index and the Chicago Tribune Historical Database. No mention of a race in Libertyville with Rickenbacker and Disbrow in 1914. However, I did find several articles in July/August 1913 that looked worth pursuing  – “World Famous Drivers to Race the Race Track”, “Speed Kings of Country to Race at Libertyville”,  “Biggest Race Carnival of Year at Libertyville”. The articles touted the line-up including Louis Disbrow in his Simplex “Zip”, as well as Barney Oldfield, “Wild” Bill Endicott, and…..Eddie Rickenbacker in his Mason.3

The weekend of August 9-10 drivers descended on the Libertyville One-Mile Track with hopes of breaking world speed records.  The meet was to cover two days.  A 100-mile race would be the featured event and be last on the program. 4  Rickenbacker was the “chief breadwinner” on August 9 winning two events – the first heat of the 10-mile race and a five mile race – as well as having the best time in the mile dash.  The 100-mile race scheduled for Saturday was rescheduled to Sunday due to a preponderance of dust. 5

Dust was not an issue the next day. Sunday’s races were postponed because of rain and moved to August 17.  Many of the racers, including Disbrow and Rickenbacker, stayed in the area and practiced at the track during the week long delay. 6
The Chicago Tribune described the excitement at the track the following weekend: “Five thousand persons saw the races, which were the best ever held on a dirt track in the vicinity of Chicago. Rickenbacker and Disbrow, who bear no love for each other, were the stars of the meet…[Disbrow] jockeyed his opponent [Rickenbacker] out of every chance to win [in the 10-mile race].” 7 The Lake County Independent reported “Louis Disbrow’s Simplex Zip carried its owner to a world’s competition record in a sensational duel with Eddie Rickenbacker of the Mason team…in the 10-mile race.” 8

“Disbrow Beating Rickenbacher in the 10 Mile Race”
Chicago Daily Tribune, August 18,1913, p.8
After two days of racing, Disbrow and Rickenbacker appear together in the results only for two 10-mile heats, the final 10-mile race, and the one mile time trials. Of these races, Rickenbacker was triumphant in just the August 9th 10-mile heat for which Disbrow is reported as “out.”9,10  Is this the race in question? It is the only one I can find that is 1.) in Libertyville, 2.) Rickenbacker won, and 3.) Rickenbacker beat Disbrow. The only other possibility is the 5-mile race on Day 1, but Disbrow’s finish is not reported in any of the articles. Without a complete list of race participants’ placement, it is difficult to know. There is no mention of a 100-mile race taking place on either day.
So where did the articles in the Local History Clippings File get their information?
One regularly cited source is Eddie Rickenbacker’s 1967 autobiography Rickenbacker. Rickenbacker recounts a race against Disbrow at Libertyville, IL where he kicked dust up into his rival’s face. He declares he “won the race by only 10 seconds.” 11 The anecdote is in a chapter concerning races of the 1913-1916 period, but no specific date, year or distance is specified. On to other sources.
W. David Lewis’ Eddie Rickenbacker: An American Hero in the Twentieth Century offers the most specific mention of the race. Writing about the 1914 race season, Lewis states: “He also won a 100-mile race by ten seconds against Louis Disbrow at Libertyville, Illinois, where he had been victorious a year before.”12Lewis cites the “Rickenbacker Automobile Racing Record” found in Box 23 of the Edward V. Rickenbacker Papers at the Library of Congress. According to Lewis’ source notes, the Rickenbacker Automobile Racing Record is a typewritten list, with additions in Rickenbacker’s handwriting, showing the dates, locations, distances, cars, and results of all of Rickenbacker’s races between October 4, 1911 and November 16,  1916. Lewis notes: “I have relied on this list unless evidence from primary sources contradicts it.”13
I contacted the Library of Congress and they were kind enough to send me a copy of the list. The only entry for a race at Libertyville is dated August 17, 1913. The table shows that Rickenbacker placed first at a distance of 5 miles.  That matches the local newspaper articles.  The record shows two 100-mile races in 1913, but not one at Libertyville. Rickenbacker placed first in a 100-mile race in September in Cincinnati, Ohio.14 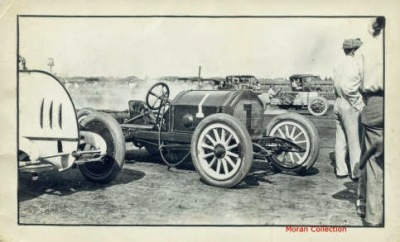 I thought I would contact Dr. Lewis and see if he could shed some light on his research. Unfortunately, Dr. Lewis passed away in 2007, but his papers and a collection of Eddie Rickenbacker papers are held by the Auburn University Libraries Special Collections and Archives. Archivist John Varner graciously looked through the Rickenbacker scrapbooks for any mention of a Libertyville race. He did locate a few clippings mentioning Rickenbacker and Disbrow, but none that shed light on the current question.
As I was drafting this post, I came upon an earlier Rickenbacker article by Dr. Lewis – perhaps a precursor to the book. Writing about the 1914 season, Lewis states: “…Rickenbacker also savored the joy of victory before ending his first year on the tour. His first win was modest, coming in a 5-mile race at Libertyville, Illinois, on August 17, but he had a more impressive triumph on September 30, when he outpaced the field in a 100-mile event at Cincinnati.”15 He cites the same Rickenbacker Automobile Racing Record as his source.
Now what?

I’m pretty confident that there was not a Rickenbacker-Disbrow race in Libertyville in 1914. I have found no other sources besides the Lewis book that place the race in 1914 and Lewis’ source of information is not clear. In fact, he provides different information in a prior article.

As happens so often, my research on the Rickenbacker-Disbrow race of 1914 has brought up additional questions:

·         What race is Rickenbacker describing in his autobiography?

·         Could the Libertyville race have been a practice race during the week-long delay?

The answers to these questions can be found only by continuing the quest, doing additional research, and finding additional sources. If I find out anything new, I’ll be sure to publish it in this space.

One thought on “Origin of a Local History Reference Quest(ion)”