Before the end of the school year, local history librarians Sonia Schoenfield and Jenny Barry were invited to speak to the third grade students at Copeland Manor School. Each spring the third grade completes units on the history of Chicago including the Great Chicago Fire and how transportation impacted the growth of Chicago and the growth of the suburbs.  Ms. Schoenfield and Ms. Barry accepted the challenge to show that Libertyville’s growth was driven by many of the same factors. See if you can find the similarities between the developments of the two towns. The third graders at Copeland sure did!

On May 31, 1880, the Chicago, Milwaukee, and St. Paul Railroad pulled in to Libertyville for the first time. With daily freight service and, not much later, passenger service, commerce grew and so did the population.  Between 1880 and 1890 the population of Libertyville doubled from 221 to 550 people. Read more about Libertyville’s First Railroad in a previous blog post at http://libertyvillespast.blogspot.com/2013/11/here-comes-railroad.html 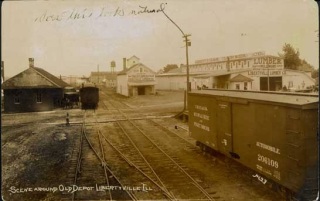 In 1895 an entire block of downtown Libertyville had to be rebuilt. Why?

The Great Libertyville Fire of 1895
Cigar maker Max LeBeau was up late working to finish cigar orders.  Around midnight, Max rose from his chair, walked to the front of his shop and looked out the window. What he saw sent a cold chill up his spine. Huge flames were leaping skyward in back of Schanck’s Hardware store on the corner of Sprague (now Cook) and Milwaukee (Rolland’s Jewelers, across from Picnic Basket). Max called “Fire! Fire!” rousing many people from their sleep.

Bucket brigades quickly formed because there was no fire department. Despite the efforts of the people carrying buckets, and primarily because of a lack of a readily available water supply, fighting the fire proved a losing battle.  What started at Sprague Street ended one block north at High Street (School Street today). Buildings on the west side of Milwaukee were untouched, but on the east side, 27 frame buildings were completely destroyed.

Instead of being defeated, the citizens of Libertyville rallied. Downtown Libertyville was stronger than ever as evidenced by a 1903 Lake County Independent article stating:

“Libertyville’s remarkable growth within the last few years is mainly the result of the great fire of 1895, which wiped out the entire business section. Since then the grit and energy of its businessmen have materialized into what might be termed a united effort to build a new and ideal city on the ashes of the old town.”

Stay tuned for a look at the 1920’s and post-WWII Libertyville population booms in our next post.