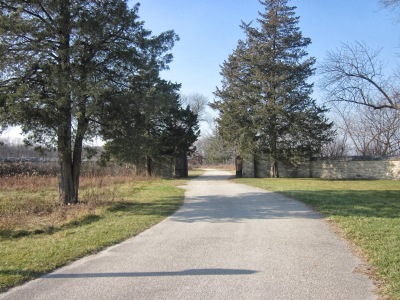 If you’ve ever driven on North River Road, as the road takes a sharp jog to the right, you may have noticed an old gate hidden by overgrown trees. Beyond the gate lie fields and trees but not much else. The curious mind wonders, what’s back there?
Ask around and you’ll get answers akin to urban myths concerning murder, nuns, a mental asylum or summer camps, tales about ghosts, blood, and mysterious sounds. Librarians Jenny Barry, Arlene Lane and Sonia Schoenfield set out in 2012 to uncover the truth. We found a few tragic accounts but mostly tales of people who wanted to use the land to help others less fortunate than themselves. 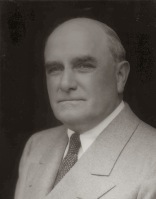 Early owners of the land dating back to 1846 include farmers William Boardman and Solomon Kelsey. The gate’s history begins, however, with Britton I. Budd (above left), a Chicago railroad executive and president of the Public Service Company, whose wife Katherine (above right) was well-known for her work with disadvantaged children. Upon Katherine’s death in 1925 Budd bought 200 acres along the Des Plaines River north of Libertyville for the purpose of building a summer camp for children from (Episcopal) St. Mary’s Orphanage in Chicago.
The Katherine Kreigh Budd Memorial Home for Children was dedicated June 27, 1926. The camp consisted of 15 buildings including dormitories, a dining hall, a recreation hall, a chapel, an infirmary and an outdoor swimming pool and playground.

Also known as Doddridge Farm, the camp welcomed girls from the orphanage for several years. It was also used by Episcopalian clergy as an annual retreat location and by other groups such as the Illinois Emergency Relief Commission who hosted convalescent women on relief rolls during the Depression in the early 1930s.

In the late 1930s the camp was leased to the Boy Scouts by the Episcopal Church; later they sold the property to the Catholic Church and the Catholic Youth Organization (CYO) so that the camp facilities could be more fully utilized. 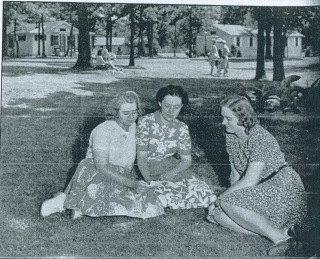 The Catholic Church invited a European, Catholic lay woman’s organization, The Ladies of the Grail, to establish their U.S. headquarters at Doddridge Farm in 1940. Some of The Ladies are pictured above at Doddridge Farm. The organization was tasked with readying the camp buildings first for war refugees (who never arrived) and then for summer camps for inner city children.
Dissatisfaction arose, however, as the Ladies of the Grail felt that the initial camp repairs had been mismanaged and that their authority at the camps was undermined by the CYO. In addition, The Grail preferred to spend more time developing their own programs instead of the children’s camps. They left Doddridge Farm in 1943.

The CYO took over running the camp, followed by Catholic Charities in 1954. In 1955 Franciscan brothers repurposed the site as St. Francis Boys’ Camp until 1973. The camp was opened to girls until 1979 when the camp closed for good and the buildings were demolished. 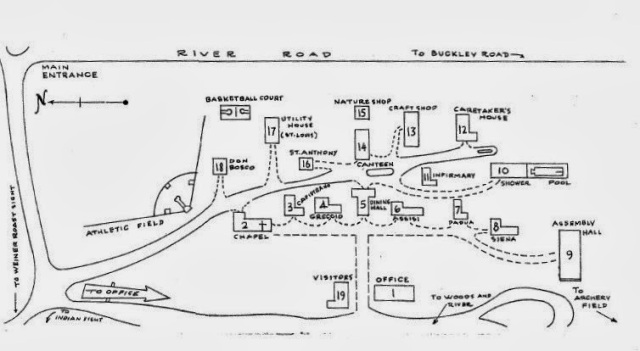 The Lake County Forest Preserves had been purchasing land north of Libertyville along the Des Plaines River throughout the 1970s, and in 1982 they acquired the site of the former camp. Since 1985, volunteers have set about reclaiming the land and restoring it to its native state. Volunteers regularly participate in clearing and cutting invasive species, replacing them with native plants.

The land behind the gate is not without misfortune. In 1943 a watchman from Doddridge Farm was arrested for armed robbery; he subsequently escaped from the Lake County Jail but did no harm to anyone. In 1961 a toddler drowned in the Des Plaines River after wandering away from his family. In 2002 a woman’s remains were discovered on the property, disposed of by her husband who worked at nearby stables and who confessed to her murder in 2008.
Despite these tragedies, the gruesome legends and urban myths perpetuated about the property do not hold up. The enduring legacy of the property behind the gate is one of good will and good works. Today, under the stewardship of the Lake County Forest Preserves, a part of the land is currently accessible to the public, and the rest is being restored as open space.

2 thoughts on “Behind the Gate”